Is It OK to Use an Electric Menorah for Hanukkah?

Reprinted with permission from
Iyyun, an institute for the exploration of the deeper dimensions of Torah.

Meditating on the flame of the menorah is integral to the Hanukkah lights. Unlike the Shabbat candles, for example, which are kindled to add kavod (honor) to the ensuing day or for the purpose of oneg (pleasure) so that we eat in light and do not stumble in darkness, the flames of the menorah are lit for no personal use whatsoever, rather simply, as the Rambam writes, “to manifest and reveal the miracle” or in the words of the prayer following the lighting: “These lights are holy. Permission is not granted to use them, merely to look at them.” Since looking is all that can be done, Hasidic teachers and Kabbalistic masters have suggested we do so. Once we light the flames we should sit gently next to the lights and look, notice and listen to them.

What is their story? And what are they telling us? Most clearly they are telling us is to simply quiet down. Often we become so entangled in the noise and onrush of day-to-day life that we fail to truly notice that which is important. Almost habitually we go around stressing about the future or violently regretting the past, that we neglect to focus on the present. The mind tends to settle in all directions of time except the moment. The gentle hissing sound of the flame begs us to slow down, relax, become more introspective, reflective, and take notice.

So we sit there quietly and listen, become attentive and introspect. In due time, as the light fills our imagination we become fully aware and realize that there is nothing fundamentally outside and besides the Ultimate Light.

What Do We See?

Looking at the flames, what do we see? Noticeably there are three basic elements to the fire; the flame, the wick and the oil or wax. Says the Zohar; the body is similar to the wick, the flame itself is analogous to the divine presence that rests above the head, and the oil that fuses the two together, allowing the flame to join and remain connected with the wick is our ma’asim tovim-good and illuminating deeds. (3:187a)

“The wise man’s eyes are in his head” (Kohelet. 2:14.). This means, says the Zohar, that the wise are continuously aware of the divine presence above their heads. More importantly, their awareness informs their actions and insures good deeds and proper comportment. Taking notice of the flames inspires us all to do the same.

In truth we are like a flame. The totality of who we are is reflected within the flame. The spiritual elements of self, the fire reaches upward, the physical body which gravitates downward is the wick, and our good deeds allows for a full integration among all aspects of self, body and soul.

The flame is who we are. Appropriately, the Hebrew word nefesh (spirit), comprised of the three letters, nun, pei, shin, is an acronym for ner (flame), pesilah (wick) and shemen (oil).

Penetrating a bit deeper we begin to notice the fire itself and become aware of the different shades of color within the flame. Essentially, there is the dark, intense blue light on the one hand, and on the other extreme a white luminous, almost transparent light.

What Do Colors Represent?

What do these colors represent? The Zohar describes the following;

“In the flame itself there are two lights: one white and luminous, the other black or blue. The white light is the higher of the two and rises steadily. The black or blue light is underneath the other, which rests on it as on a pedestal. The two are inseparably connected, the white resting and being enthroned upon the black…This blue or black base is in turn attached to something beneath it which keeps it in flame and impels it to cling to the white light above. This blue or black light sometimes turns red, but the white light above never changes its color. The lower light, which is sometimes black, sometimes blue, and sometimes red, is a connecting link between the white light to which it is attached above and to the concrete body to which it is attached below, and which keeps it alight. This light always consumes anything which is under it or which is brought in contact with it, for such is its nature, to be a source of destruction and death. But the white light which is above it never consumes or destroys and never changes. (1 Zohar. p. 51a.)

This lower more dense fire is a reflection of all of physical life, in which life feeds off death and everything in nature is continuously altering and putting on different coats. In the physical plane of existence, in order for one living organism to survive it must consume another form of life. After the body has served its purpose, it slowly rejoins the earth and transforms into the soil upon which new life grows. Mineral becomes plant, plant becomes animal, animal man, and man in turn returns to earth.

Higher, white fire is our spirituality, that which does not need to overwhelm or negate the other to exist. The whiter and more transparent the shade of fire becomes the deeper the level of soul it represents until the peak of the flame, a point in which the transparent fire becomes almost invisible and dips into the infinite space and merges.

Within the human psyche there are levels of varying consciousness. The outermost manifest surface self is our autobiography, that which is in a constant state of motion and movement, so long as we are sensing this part of self is expanding, much like the lower fire that fluctuates, jumps around, changes colors depending on the heat. Higher and deeper within us rests the core of self, the essence of soul. The self that is the unchanging that registers the changing, the continuous that observes the discontinuous, the uninfluenced that informs the influenced.

The ecstatic dancing flames as well as the more subdued gentle flames mirror life itself. Every moment we live, and with every breath we take we are constantly moving, shifting back and forth, inhaling and exhaling, expanding and contracting. Meta-physically speaking, every moment of life we are continually being recreated, becoming embodied and expiring and then re-embodying again.

The movement upwards and beyond is ratzu–a deep desire to expire and lift off, whereas the movement downward and within is shuv–a deep awareness that the purpose is within the here-and-now. The constant flickering of the lower flames jumping and leaping higher is the ratzu. Shuv is the more settled and clearer whiter light. The spiritually less evolved levels of self desire expiration, to transcend world, and in the process neglect body, yet the deepest awareness is one that is in total harmony with its divine purpose, which is to be within the world, as you are intentionally embodied, and there catapult a transformation. Obviously, the shuv reality is a profounder level and state of bitul-negation of separate self, as one is more in tune with the divine reality and the ultimate purpose.

Both the ratzu and shuv serve and enhance each other. The ratzu ensures a lightness of being–that our involvement with world and body does not devolve into preoccupation and eventual existential anxiety, whereas the shuv ensures that we do not slip fully into ecstasy and eventually expire.

Healthy living depends on balance, both physically as in breathing and spiritually as in ratzu and shuv. “Ve’ahavta Es Hashem“–You shall love Hashem. True love is movement in both directions; ratzu and shuv, drawing closer and moving back, rising upward and returning. The Hebrew letters that comprise the word ve’ahavta—vav (6), aleph (1), hei (5), bet (2, taf (400)–has the numeric value of 414, twice the value of the word or-light–aleph (1), vav (6), riesh (200)= 207. Genuine love, on all levels of reality, has direct light, as in giving, contracting and reaching out, and reflective light, as in receiving, expanding and opening up.

Havaya represents the utter transcendence, beyond all definitions or relationship with time or space, and yet havaya is projected within adonai (Master of the world), elokim (Lord of the world), and eheyeh (the ever unfolding process of becoming). There is absolute oneness and unity.

Yet all shades of the flame rests upon empty space. Just below the flame, where fire and wick converge, there appears to be an empty region. The fire begins slightly removed from the wick, or so it seems. Ultimately, if we wish to exude light, warmth and wisdom we must first disappear, attain a measure of bitul, and then the light we project outwardly will be a warming, gentle and overwhelmingly inspiring.

Shining our Light on the Hidden Spaces

At the beginning of the night of the 14th of Nisan (the evening before Passover), check for chametz (leavened products) ... 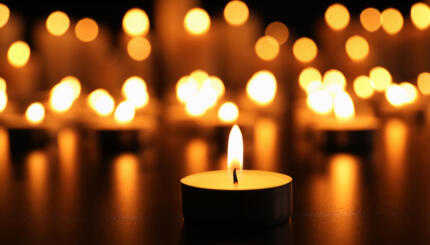 Fire can be destructive or constructive as well as a tool for connecting with the divine.