In the Torah portion of Ha’Azinu, Moses sings his final song as instructed by God. The Haftarah for Ha’azinu also centers on a song — that of King David, the biblical harpist and, according to rabbinic tradition, the composer of much of the Book of Psalms.

The Haftarah opens after David has been rescued from his enemies, including King Saul, who sought to kill him after David threatened Saul’s throne. “God is my rock, my shelter, my refuge,” David sings (22:2). He compares Saul to the netherworld (the word for the netherworld, sheol, sounds like Saul’s name in Hebrew, Shaul). David also speaks of how he was trapped in there: “The waves of Death surrounded me; Destruction’s floods frightened me…The sky’s foundations shook, Your wrath made them shudder” (22:5-8).

David employs a series of powerful images — from God as a sort of lifeguard, saving him from drowning (22:17), to God as a mighty judge (22:23), to God as a hunter (22:33). The central theme conveyed by these images is that while David is helpless against much greater forces, God is the ultimate power that will save him.

In the end, the poem turns into a declaration of David’s God-given strength. “God…trains my hands for battle, my arms to bend a bow of bronze. You have bestowed on me Your triumphant shield” (22:35-36).

With a dramatic flourish, his song climaxes: “The Eternal lives! Praised be my Rock! God is exalted…so I thank You, Eternal One, among the nations, and sing praises to Your name” (22:47-50).

Having a king won't necessarily make life easier for the 12 tribes of Israel. 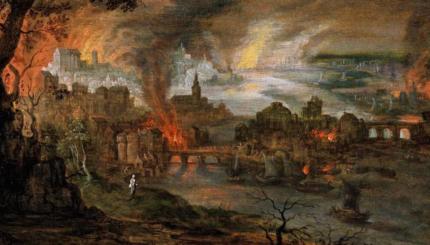 In Parashat Ha'Azinu, God is portrayed in many different lights.