Esther presents us with an unusual opportunity to study the early growth and interpretation of a biblical story. In addition to the Masoretic Text (the accepted Hebrew text of the Bible), two Greek versions of the story survive: the version preserved in the Septuagint (a Greek translation of the Bible), also known as the B-text, and a shorter Greek version, known as the Alpha-text or A-text (sometimes referred to as the Lucianic recension, or L).

Current scholarly interest in Jewish literature of the Greco-Roman period and in the history of biblical interpretation has spurred a number of recent studies of the Greek versions and comparisons of the two Greek versions with each other and with the Masoretic Text. These studies shed light on what the basic outlines of the earliest form of the story might have been before it reached the form in which we have it in the Masoretic Text, and how the story was reshaped in its different textual versions.

The complicated textual development that produced the three extant versions need not occupy us here. Our concern is the Masoretic Text, so we need to understand that this text was probably based on a Hebrew story that has not been preserved but that was similar to our Hebrew Esther. In its pre-Masoretic form, it was not the story of the origin of Purim; the emphasis on Purim was added by the author of the Masoretic Text, who reshaped the story as an etiology (story of origins) for Purim.

How the Greek Versions Differ

The major differences between the Masoretic Text and the Greek versions are the six Additions. These Additions were once an integral part of the Septuagint, but when Jerome (fourth century CE) translated the Greek Bible into Latin (the Vulgate), he observed that these passages had no equivalent in the Hebrew text of his time. Doubting their authenticity as divinely inspired scripture, he relegated them to the end of his translation. They remain canonical for the Roman Catholic and the Eastern Orthodox Churches. Protestants declared them uncanonical and placed them in the Apocrypha, under the title “Additions to Esther.” The Additions make little sense at the end of the book since they are out of context, so some modern Christian Bibles have reinstated them into their appropriate positions within the story.

The Greek versions also include the religious elements so obviously absent in the Masoretic Text–the name of God and prayer. The name of God occurs not only in the Additions, but at several other points in the story. There are a number of other differences in the details of the story and in the way the story is told. For instance, Haman is not an Agagite, Purim does not receive as much emphasis, and Esther is characterized differently.

That is, the Septuagint sought to make the book sound more biblical, more like the books of Ezra, Nehemiah, and Daniel, where God’s presence is felt in the events that unfold and where the characters engage in religious activities (praying and invoking God’s name). Mordecai’s dream and its interpretation is also similar to what we find in Daniel. And thirdly, the inclusion of the contents of the edicts also resembles the practice in Ezra, Nehemiah, and Daniel, which include what purports to be verbatim copies of Persian documents. We have discussed above how the Masoretic Text of Esther sought to fashion itself, in part, on the model of earlier biblical writings, now we see that principle carried further, for different effect, in the Septuagint.

But “assimilation to a scriptural norm” does not account for all the differences between the Masoretic Text and the Septuagint. There are other differences that reflect the Septuagint’s Hellenistic worldview as opposed to the earlier worldview of the Masoretic Text. The Hellenistic world was one in which, according to R. Frye (Minorities in the History of the Near East), religious identity had replaced ethnic identity. That may explain even further why the Jewish characters are more religious, for it is religious practice that defines one as a Jew.

Take the practice of circumcision. No mention is made of it in the Masoretic Text of Esther, but in the Septuagint at the end of chapter eight we read, “And many of the Gentiles were circumcised and became Jews.” Circumcision is an ancient biblical practice, and was practiced by other peoples beside Israel, but in the Hellenistic world, circumcision was taken to be the distinctive sign of (male) Jewish identity. It was, along with the observance of the Sabbath and kashrut (especially the prohibition on the eating of pork), the most outstanding mark of the Jew in relation to other religions or nationalities.

In the same vein, we find Esther, in her prayer in Addition C, saying, “I abhor the bed of the uncircumcised and of any alien,” and that “Your servant has not eaten at Haman’s table, and I have not honored the king’s feast or drunk the wine of libations.” The Septuagint has made Esther into a pious Jewess of the Hellenistic (early rabbinic) period, who disdains marriage with a non-Jew, eats only kosher food, and does not drink wine used for libations to pagan gods (yein nesekh).

The Septuagint reflects Hellenistic times in another way — in its literary style and tone. On occasion, it seems to move in the direction of the style of the later Greek novels, with emotional and psychological dimensions that are absent in the Masoretic Text. This is most obvious in Addition D, when Esther goes to the king uninvited. She entered, adorned with majesty, leaning on the arms of her two maids. Her heart was frozen with fear, and the bedazzling sight of the king, in full array, covered with gold and precious stones, was terrifying. Then:

Lifting his face, flushed with splendor, he looked at her in fierce anger. The queen faltered, and turned pale and faint, and collapsed on the head of the maid who went in front of her. Then God changed the spirit of the king to gentleness, and in alarm he sprang from his throne and took her in his arms until she came to herself. He comforted her with soothing words.

This is the stuff of Greek romances (and modern ones, too), and it is in utter contrast to the sparseness of the Masoretic Text at this point in the story. So, we may conclude that the Septuagint is, on one hand, more biblical than the Masoretic Text, but on the other hand it is more Hellenistic, both in respect to Jewish identity and practice and in respect to Hellenistic storytelling.

This description of how the Septuagint reshaped the story should make clear that it is a form of early biblical interpretation. The relationship between it and the Masoretic Text is not simply that of an original Hebrew text and its translation, although even a translation is a form of interpretation, since the translator must decide on the meanings of words and verses in order to translate them.

As more and more scholars are coming to see, the early fluidity of the Hebrew text and the variety of ways that the story was retold, in Hebrew or other languages, belong to the history of early Jewish biblical interpretation. The Septuagint is a window onto how Greek-speaking Jews of the early pre-Christian centuries read and understood the story of Esther.

This article is excerpted from a longer, footnoted item. It is reprinted with permission from The JPS Bible Commentary: Esther published by the Jewish Publication Society. 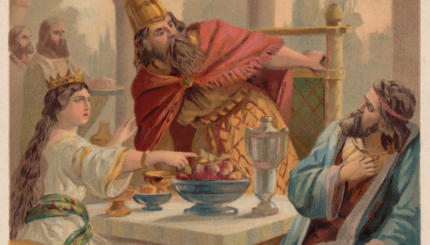