The State of Judaism in Persian Judea

Monotheistic worship was certainly the norm in Judea. The [biblical] books of Malachi and Nehemiah, however, speak of such problems as violations of sacrificial law, neglect of the Sabbath, and nonpayment of tithes. There was a breakdown of morality and a rise in divorce. Cheating of employees and preying on the weak became commonplace, and many of the poor were reduced to servitude. Intermarriage with the surrounding nations threatened the continuity of the Jewish community.

The Appearance of Ezra and Nehemiah

It was at this crucial juncture that the great reformers Ezra and Nehemiah made their appearance. Fortuitously, this was also a period of great instability in the Persian Empire. In an effort to shore up his lines of communication with Egypt, Artaxerxes wanted to regularize the situation in Palestine, and this provided Ezra and Nehemiah with the opportunity to make substantial progress.

The chronological relationship of the careers of these two great leaders poses serious difficulties. Nehemiah’s career ex­tended from 445 until sometime after 433 B.C.E. Ezra’s dating is more difficult. The plain sense of the biblical text suggests that he arrived in Judea in 458 B.C.E. (thirteen years before Nehemiah) and completed his work shortly after Nehemiah’s arrival. Some scholars take the view that he arrived long after Nehemiah’s work had ended. A final approach, following the Greek text of the apocryphal 1 Esdras, suggests that Ezra arrived shortly before the end of Nehemiah’s career in about 428 B.C. E.

According to the biblical account, which we see no compelling reason to set aside, Ezra left Babylon in 458 B.C.E. at the head of a considerable company of returnees. After a four‑month journey, unaccompanied by a military escort, the caravan ar­rived in Jerusalem. Ezra came armed with a copy of the Torah and a document from the king authorizing him to enforce it. He was to teach the law and to set up the necessary administrative apparatus to see that it was followed. He had also obtained permission to collect contributions from the Jews of Babylonia to support the Temple in Jerusalem.

Ezra is described by the Bible as "a scribe of the law of the God of Heaven." He was of priestly lineage and was probably appointed at the request of influential Jews at the Persian court. Those who see Ezra as coming after Nehemiah maintain that Nehemiah was responsible for his appointment. While it might seem unlikely that the monarchs of Persia would be concerned with the religious observances of the Jews of Judea, Ezra’s mission can be understood from the standpoint of purely Persian interests.

Under Persian rule, each subject people was allowed to live by its ancestral laws, which were enforced by the imperial government. Violations of the laws of the group to which one belonged constituted an offense against the state precisely because they led to instability. The maintenance of order in Judea, for example, would ensure the security of the land bridge to Egypt, and therefore the king required, in his own interest, that Jewish law be observed.

Reading the Torah, Following Its Laws

Immediately preceding the feast of Sukkot (Tabernacles) soon after his arrival, Ezra read the Torah publicly to the entire people. Indeed, this was a covenant‑renewal ceremony in the strict sense. To make the Torah understandable to them, he had it explained. By this time, Aramaic, a West Semitic language, had become the spoken language of much of the Persian Empire and was the vernacular of most Jews. The biblical account relates that the people were greatly saddened when they learned that they had been lax in following the law, and it was only with difficulty that Ezra was able to restore the joy of festival season. Throughout the festival the law was read on each day.

Nonetheless, Ezra continued to face violations of the Torah regulations. Mixed marriages were a substantial problem. The increase must have resulted from the small size of the Judean population and the attendant difficulty in finding spouses. Ezra led the people to enter into a covenant by which they voluntarily expelled the 113 foreign wives in the community. Already in this period the law that Jewish identity is determined through the mother was operative. The biblical narrative singles out the families in which the mother was not Jewish, for such unions led to the birth of non‑Jewish children. Despite Ezra’s considerable efforts, however, we can be sure that intermarriage continued, although on a much smaller scale.

The high point of Ezra’s careerwas certainly the covenant renewal and reformation of Jewish life recorded at the end of the Book of Nehemiah (chaps. 9 and 10). The covenant he instituted bound the people to abstain from mixed marriages, refrain from work on the Sabbath, observe the laws of the sabbatical year, pay taxes for the communal maintenance of the Temple, and provide wood offerings for the sacrificial altar, first fruits, and tithes […] Those who date Ezra’s arrival to the second term of Nehemiah see the covenant as the culmination of the joint efforts of the two men, but the biblical sources do not place them together.

Ezra now fades from the scene. He is often credited with having created post-biblical Judaism, a view somewhat over­stated. What this leader, teacher, and scholar did was to establish the basis for the future of Judaism: from here on, the canonized Torah, the Five Books of Moses, would be the constitution of Jewish life. By pointing post-biblical Judaism on the road of scriptural interpretation, Ezra had ensured the continuity of the biblical heritage.

In December of 445 B.C.E. Nehemiah, the cup bearer to King Artaxerxes, was informed by his brother Hanai, who had just arrived from Jerusalem, of the difficult situation in Judea. Nehemiah approached the king and succeeded in getting permission to rebuild the walls of Jerusalem, obtaining the governor­ship of Judea and having it established as a province separate from Samaria. By 444 B.C.E. he had established his control over the newly created province. In a fifty‑two‑day stretch he man­aged to rebuild the city walls, although it is possible that this was a temporary fortification and that the permanent walls took another two years to complete.

Throughout the period of rebuilding, Sanballat, the governor of Samaria, aided by Tobiah, the ruler of Ammon, and Gashmu an Arab chieftain, constantly opposed Nehemiah. Nonetheless, Nehemiah persevered. In order to create a commercial center for the country, he brought people from the hinterland into Jerusalem. With the walls up and the new population base established, Jerusalem’s role as the center of Jewish Palestine was guaranteed.

In Nehemiah’s time the population of Judea may be estimated at some fifty thousand souls, concentrated on the mountain ridge stretching from Beth Zur north to Bethel. The province had already been divided into districts when he came into office, probably remnants of the administrative system set up by the neo‑Babylonian rulers after the conquest and destruction of Judah in 586 B.C.E. He allied himself with those who wanted to restore pure monotheism while his aristocratic opponents continued the old syncretistic tendencies against which the prophets had constantly railed.

After twelve years, Nehemiah’s term as governor came to an end. Soon after returning to the Persian court, he was reappointed to the post. Nehemiah returned to Judea to find that conditions had worsened. The syncretistic party had scored substantial gains, and he had to expel Tobiah the Ammonite from an office in the Temple. Indeed, a descendant of the high priest Eliashiv had married the daughter of the Samaritan Sanballat. Nehemiah began a vigorous religious reform, fighting against the rising tide of intermarriage, and insisting that levitical tithes be paid and that wood for the altar be properly furnished. He strengthened and encouraged the strict observance of the Sabbath.

Those who take the view that Ezra came after Nehemiah see him as arriving at this time, perhaps having been brought by Nehemiah to help restore the proper observance of the Torah. We do not know exactly when Nehemiah’s second term ended. It may have been with the death of Artaxerxes I in 424 BCE. He was definitely out of office by 408 B.C.E., when a Persian named Bagoas was governor of Judea according to the Elephantine documents. [Many Aramaic documents have survived from Elephantine (Egypt) and these provide us with a window into the colony’s culture and religion.] 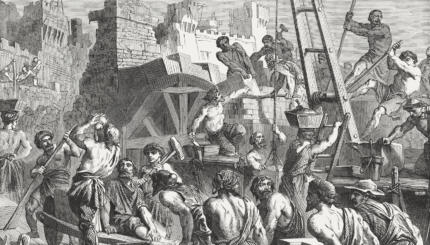 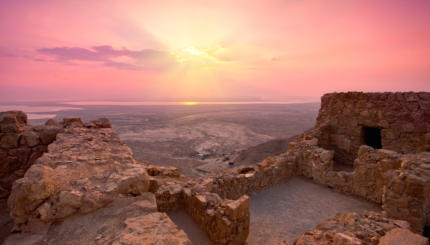