Despite the recognition of Esther’s comic nature by many scholars, some readers may be surprised or even shocked by this idea. That is because the inclusion of a book in the biblical canon affects the way we perceive the book, or certainly the way it was perceived in premodern times and may still be perceived in traditional circles.

The very fact that Esther is part of the Bible–a holy book with religious authority and religious teachings–forces us to make it fit the expectations we have about what the Bible is and what kinds of writing it contains. We expect a biblical book to be serious and its message to be congruent with the messages of other biblical books as they have been interpreted by the tradition.

The comic aspects of the book are not incidental, merely to provide comic relief; they are the essence of the book. They define the genre of the book, and thus set the parameters according to which we should read it. We cannot appreciate the story fully unless we realize that it is meant to be funny.

To be sure, it is not always easy to agree on what is funny, especially in an ancient or foreign work. Nonetheless, humor of various types is well-documented in ancient Near Eastern literature, including the Bible. Most readers recognize the humor in Esther 6, when Haman realizes that he must honor the very person whom he wishes to disgrace, and in Esther 7, when the king reacts to seeing Haman fallen on Esther’s couch. These scenes are not isolated touches of humor, but are among the most obvious in a book where comedy is the dominant tone.

Since we have no theoretical writings from ancient Israel about comedy, or about any type of literature, we must call upon later literary theory and apply it to the Bible as best we can. (Already I have taken the liberty of applying comedy to narrative, whereas in its narrowest definition it is limited to drama. This and related terms can be used for all forms of literature.)

Several modern terms associated with the comic may be usefully applied to Esther. They are not meant to serve as absolute definitions of Esther’s genre or subgenre, and since their definitions grew out of very different literatures (ancient Greek and medieval and modem European and American literatures), we cannot expect a perfect fit with Esther.

Nevertheless, these terms and their definitions help to describe some of the parameters of comic literature and to suggest ways to understand the comic nature of the book. Comedy is the most general of the terms, and farce is even better, for it may be considered “the purest quintessential comedy (M. Charney, Comedy High and Low: An Introduction to the Experience of Comedy, p. 97).

Farce is a type of comedy designed to provoke the audience to simple, hearty laughter. To do so, it employs highly exaggerated or caricatured character types, puts men into impossible and ludicrous situations, and makes free use of broad verbal humor and physical horseplay (M. H. Abrams, A Glossary of Literary Terms, p. 26).

We will return to farce, for it best describes Esther, but first another term, burlesque, should be introduced. Burlesque is defined as “an artistic composition… that, for the sake of laughter, vulgarizes lofty material or treats ordinary material with mock dignity” (Random House Dictionary of the English Language, 1987).

The lofty material that Esther vulgarizes is the Persian empire and the Persian court. The normally sedate affairs of state, the carefully organized and controlled government structure, the legal system, the efficient postal system, the impressive accumulation of wealth indicative of a successful empire–all of the achievements most praiseworthy in the Persian empire are turned into a burlesque of Persian court life, caricatured by ludicrous edicts delivered by speeding messengers, a foppish royal court with an endless hierarchy of officials, and a wooden adherence to nonsensical laws. A major policy decision, the annihilation of the Jews, is made casually, but a small domestic incident, Vashti’s nonappearance at a party, becomes a crisis of state, with all the bureaucratic trappings that can be mustered.

The term satire has also been applied to Esther, most recently by Ze’ev Weisman (Political Satire in the Bible, pp. 139-163). The line between farce and satire is hard to draw, and there are certainly elements of satire in the book, especially those directed at Persian court life. However, these elements are incidental. The book is not primarily aimed at criticizing the Persian empire or its lifestyle. After all, Ahasuerus emerges stronger at the end of the story than he was at the beginning, and Mordecai and Esther benefit handsomely from all that the Persian court has to offer and become two of its most elite members.

It is better to understand the description of the Persian court as burlesque rather than as satire; its purpose is comedy, not critique. The burlesque of the Persian court provides the setting for the farce. Burlesque also has the connotation of bawdiness, and as we shall see, the Book of Esther does not lack bawdiness, especially in chapter 1, the chapter in which court life is most on display.

Comic Styles in the Book of Esther

The style associated with burlesque, farce, and other types of low comedy uses exaggeration, caricature, ludicrous situations, practical jokes, coincidences, improbabilities, and verbal humor. Farce often employs repetition–of scenes, events, and phrases–and inversions or reversals. Most of these features are prominent in Esther and have been identified in the commentaries, but without the realization that they are characteristic of comedy or farce.

Another characteristic of farce is a misunderstanding in which two characters interpret the same event in different ways (J. M. Davis, Farce, p. 62). Classic examples of this type of misunderstanding occur in chapter six, when Haman mistakenly assumes that the king is planning to honor him, not Mordecai, and in chapter seven, when Ahasuerus misunderstands or pretends to misunderstand why Haman has fallen on Esther’s couch. The effect in both cases is extremely comic.

In farce there is little concern with the subtlety of characterization. Farce tends to use exaggerated or caricatured character types. In Esther, all the characters are types: Ahasuerus is a caricature of a pampered and bumbling monarch, a ruler ruled by his advisors; Esther is a paragon of feminine heroism; Mordecai is the model of a wise courtier; Haman is the archetypal comic villain–a knave, but, in keeping with farce, not darkly evil. We are not meant to feel threatened by the comic villain–not even children are afraid of Haman–nor are we meant to sympathize with him when he meets his deserved end. He is doomed from the start and we enjoy watching his downfall.

The characterization in the book is intentional, cleverly done, and adds to the farcical humor. In fact, there is a striking resemblance to the stock characters in Greek comedy: the alazon, an imposter or self-deceiving braggart (Haman); the eiron, the self-deprecatory and understating character whose contest with the alazon is central to the comic plot (Mordecai); and the bomolochos, the buffoon whose antics add an extra comic element (Ahasuerus).

The plot is often unconvincing because one of the characteristics of farce is the rejection of rationality. “Farce enshrines the element of unreason” (J. M. Davis, Farce, p. 23). So the logical impossibility that looms largest–that Mordecai’s Jewish identity is publicly known while Esther’s remains secret–suddenly ceases to be problematic and becomes one more piece in the highly improbable plot. In fact, the entire plot turns on a succession of unlikely events, like the selection of a queen in a beauty contest and a series of ridiculous but irrevocable edicts.

The largest interpretive problems melt away if the story is taken as a farce or a comedy associated with a carnival-like festival. The book sets out a threat to the Jews so that the Jewish audience can watch with glee and laugh with relief as it is overcome. The mad and threatening world of the beginning of the story fades into a happy ending where, for a brief moment, the Jews, through their two representatives, can play at wielding the highest power in the great empire to which they were in reality subservient and in which they were an insignificant minority.

The story, like its accompanying festival, does what comedy and carnival are supposed to do. It confirms the belief that the power at work in the universe favors life and favors the success of the Jews. The Book of Esther affirms that all is right with the world and with the place of the Jews in it.

This article is excerpted from a longer, footnoted item. It is reprinted with permission from The JPS Bible Commentary: Esther published by the Jewish Publication Society. 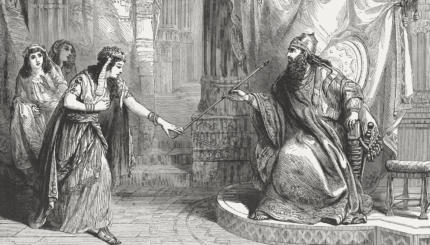 When an oppressed group massacres others.