Hanukkah is a paradigm of the relationship between acculturation and assimilation. The final victory of Hanukkah was set in motion by the resistance of the most traditional elements–many of them “square” country folk–to the growing encroachment of Hellenistic values. In many ways, the rebels were in greater conflict with their fellow Hellenizing Jews than with the Hellenes. The arrogant universalism in Hellenism demanded that Jews give up their distinctive religious ways for the greater good. Many Jews agreed, but the Pietists did not.

Hanukkah dramatizes the positive strength of Pietism, of Hasidic Jewry’s unquestioning loyalty to Judaism. It challenges modern Jews to review their own easy acceptance of cosmopolitanism and sophisticated culture as superior to the sentiment and tribal feeling of being Jews. It asks whether, consciously or unconsciously, modern Jews are part of the Hellenizing, assimilating majority. Like the crisis of the Holocaust and threats to Israel, it forces people to face up to the issue: Are they ultimately Jews? In an ultimate crisis of loyalties, would one choose Jewish survival?

People who would never consider a Hebrew day school for their child because what is American comes first are making Judaism a secondary loyalty. People who would be more upset if their child married an Orthodox Jew than if their child married a Gentile have really made a determination of primary loyalty. The lesson of Hanukkah is that a strong priority to being Jewish is the key to right choices in Jewish history. Sometimes one should not reason. There has to be a primordial will to Jewishness first or to Israel’s survival first. The reasoning and the willingness to negotiate some issues come second.

At the same time, it is not enough to be stubborn or to ignore the surrounding culture. This tactic works only when Jews are isolated. It was not working in the big cities of Judea in the second century BCE,  and it will not likely work well in the highly magnetic culture/society of today.

The Chasidim of those days could not have won the battle alone. In the conflict, many Hellenizing Jews decided to stand by their fellow Jews rather than by the Greeks. A coalition won the victory of Hanukkah–the traditionalists united with acculturating Jews who decided to come down on the Jewish side. Even as they fought the cultural battle, the Maccabees and, later, the Pharisees did not simply reject Hellenism. They were profoundly touched by its individualism, its methods of analysis, literary rhetoric, and its theological concepts. They absorbed a great deal, but they gave a distinctively Jewish cast to the outside ideas and rejected many others.

The paradigm of the Jewish way implies passing through a wide variety of historical situations and cultures on the road to redemption. No one section is indispensable; the Jewish community can always sit out one particular stretch of the road. But in general, the Jewish way implies the need and willingness to go into and through many cultures–participating, learning, filtering, incorporating, handling. Exposure and integration are the keys to coping, although overexposure can lead to a blank or totally dark record.

The Rabbis deepened Judaism to cope with a dynamic civilization, one with more highly developed cultural models. In that response, Judaism rose to new heights of competence and developed the ability to swim in the sea of Hellenism. The present host culture of Jewry is even more developed, magnetic, and challenging. Jews and Judaism will have to master the field. Properly done, acculturation (modernizing) is an alternative to assimilation. Since no one group can offer all the answers for all the life situations or cope with all the options in society, it becomes very important to form coalitions to cover the field, to correct one another, to give Jewry the strength of variety and numbers.

The further lesson of Hanukkah (as Purim) is not to write off assimilating Jews. In a showdown (as in 1967 and 1973), many more Jews will be with the cause of Jewish survival than appears on the surface. A coalition of traditional, acculturating, and assimilating Jews pulled off the Maccabee miracle. What is needed is a coalition and symbiosis of traditional Jews, modernizing Jews, and those assimilating Jews who can still be reached. The real task is to begin the “guerrilla warfare” that weans people from their excessive absorption in the status quo and liberates them for authentic Jewish existence. 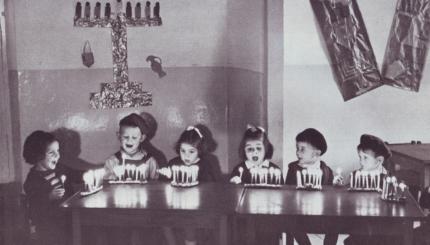 Hanukkah asks us to reconcile the worldview of the Rabbis with that of the Maccabees.