In the first parsha (weekly Torah portion), the cosmos is created in seven days, ending with the culmination of creation, the weekly Sabbath. Adam and Eve are placed in the Garden, but are expelled after eating the fruit of the Tree of the Knowledge of Good and Evil. Cain and Abel fight and Cain kills his brother, thus setting up the pattern of human violence and jealousy that the rest of the characters in the Torah must struggle with.

“And God saw all that God had made, and found it very good. And there was evening, and there was morning, the sixth day.” (Genesis 1:31)

The first part of the creation story follows a certain rhythm and structure: God creates by bringing forth a certain aspect of life, from the most simple divisions through the most complex creatures, and then reviews God’s work, finding it good. (Judaism takes from this that life in this world is a good and precious thing, and should be appreciated in all its many splendors.) After the creation of human beings on the last day, God reviews the work of creation, and finds it “very good,” presumably because now there are humans in it, and the work is complete and ready for history to begin.

The medieval commentator Rashi (R. Shlomo Yitzhaki, France, lived late 11th century) finds something grammatically unusual in this verse, and as he likes to do, uses it as the basis for a beautiful religious teaching. In all the other verses in this chapter telling us what got created on which day, it simply says: “a second day,” “a third day, ” and so on. In this verse, the day is named differently: “THE sixth day,” instead of “a sixth day.”

One interpretation Rashi offers, based on an earlier book of biblical interpretation, is that the “the” connected to “sixth day” tells us that the work of creation was at that point “hung up and standing,” and really only finished many, many years later, on the “sixth day” which would define forever after the ideal relationship between humans and the Divine.

What “sixth day” was this? The sixth day of the Hebrew month of Sivan, upon which the Jews accepted the Torah, and which is still celebrated as the holiday of Shavuot, the anniversary of the giving and receiving of the Torah at Mount Sinai. I think Rashi is not only concerned with explaining an odd extra Hebrew letter (the “hay” which means “the”), but more importantly, reminding us that merely existing physically isn’t really the whole point of our lives–from the very beginning, we were put on this earth for spiritual ends as well. The idea that God’s work of creation wasn’t “complete” until Torah was given and accepted can be a metaphor for our lives: having the most wonderful life in the physical world (work, food, housing, sex, money, you name it) won’t be complete unless spiritual goals–Torah–are accepted as our guiding principles.

Rashi seems to be less concerned with the mechanics of the physical aspects of the creation story and more concerned that we understand that our cosmos has more than only a physical dimension to it. What’s true for the world as a whole is true for each individual: one becomes complete not when one’s body finishes growing up but when one takes on a holy purpose in life. This parashah is only “Bereshit,” the beginning–the rest of the Torah remains to help us learn what that is, and what we are truly capable of.

For Every Thing, A Purpose

We should view the diversity of creation as existing to reflect the grandeur of God, not to serve the various needs of humans. 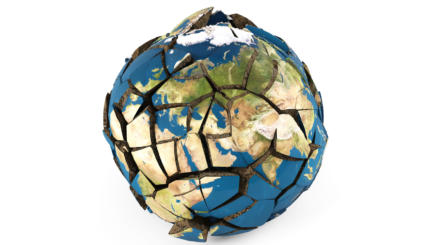 How to restore the world to a single divine reality.