The bridal canopy is a multifaceted symbol: It is a home, a garment and a bed covering. Its openness recalls the tent of the biblical Abraham, a paragon of hospitality, who kept his tents open on all sides so that visitors would know they were welcome. The tabernacle built in the desert to house the presence of God is described as a bridal canopy. According to Midrash, God created 10 splendid huppahs for the marriage of Adam and Eve. (The word is often pluralized, according to Hebrew style, as huppot or chuppot.)

The huppah (also commonly spelled chuppah) is a symbol of God’s presence at a wedding and in the home being established under the canopy. It was said the divine Name hovers above it, sanctifying the space below; after the ceremony, some rabbis invite couples to stand inside to recall — or anticipate — their own weddings.

Starting in the 16th century, probably in Poland, a portable canopy held aloft by four poles came into use. In some European communities, the embroidered Torah ark coverings (parochet) were used as the covering, but over time it became the custom to marry under a tallit (prayer shawl), which was frequently a gift from the bride’s family to the groom. The tzitzit (ritual fringes) on the prayer shawl hanging above the couple’s heads were a reminder of the mitzvot (commandments) they represent and regarded as a talisman against evil spirits. According to gematria, a numerical system in which every Hebrew letter has a number value, the 32 bunches of tzitzit correspond to the letters in the word lev, which means “heart.”

The only rule about the construction of a huppah is that it be a temporary structure made by human hands. Other than that, it’s yours to create.

Most synagogues and some caterers own huppahs, which they loan to marrying couples; often, these are made to fit on a stationary frame. These kinds of huppah covers might be embroidered, quilted or woven and decorated with familiar Jewish icons such as Kiddush cups, Stars of David, scenes of Jerusalem and texts and images from the seven marriage blessings (sheva brachot). Heavenly bodies represent the hope for future generations as numerous as the stars in the heavens.

The use of a large prayer shawl is still a popular choice and affirms a commitment to a shared Jewish life. Using a grandparent’s tallit or a family-heirloom lace tablecloth connects your past and your future and makes for a good story to share with your guests. Because any fabric can serve, huppahs can celebrate diverse family cultures with an Indian sari, Scottish tartan, lace mantilla, African textile or Native American blanket.

Making Your Own Huppah (Chuppah)

Making your own huppah is a mitzvah; the gift of one is priceless. Huppahs have been created with batik, silk screen, embroidery and needlepoint, woven wool, a cat’s cradle of ribbons. An elaborate pieced-quilt huppah can become a family treasure, as can a linen cloth with children’s handprints stamped in fabric paint.

When a huppah is handheld, it can be used in the processional, carried by four friends or relatives who also hold it aloft during the ceremony and represent the community that will support you in years to come.

Huppah poles should be long enough to stand on the ground and can be made of any material; wooden dowels can be cut to length; bamboo is both lightweight and handsome. According to ancient custom, on the birth of a daughter parents would plant a cedar tree, on the birth of a son a cypress, in anticipation of harvesting their branches for a huppah. Poles can be carved, painted or wrapped in ribbons or flowers and greenery. The sky’s the limit on creativity: One couple fastened their huppah over brightly colored helium balloons.

After the wedding, a huppah can become a wall hanging or a bedspread. Some couples loan theirs for weddings of family and friends, and some have raised their huppah for a baby-naming or brit milah ceremony.

Excerpted with permission from The Jewish Wedding Now (Simon & Schuster).

Why the Jewish wedding ceremony ends with a famous bang.

How To Make Your Wedding Inclusive

10 tips for making families, friends and guests of all backgrounds feel comfortable and welcome on your big day. 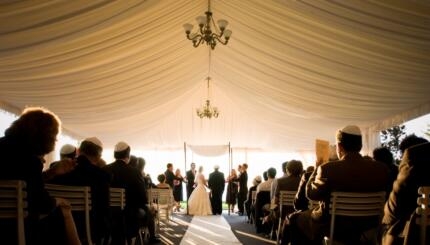