This week’s Torah portion, Nitzavim, tells us something that may seem obvious: The Torah is not in space. That is, we do not have to travel to the heavens nor cross the seas to learn Torah. It is close to our hearts and our lips to live and observe (Deuteronomy 30:11-14).

Although the Torah is not in the heavens, that is not always the case with us Jews. We read this week that sometimes the Jewish people will be so dispersed that “Even if your outcasts are at the ends of the world, from there Adonai your God will gather you, from there God will fetch you” (Deuteronomy 30:4).

These two verses provide an amazing contrast. Although the People of Book may be as far-flung as the heavens themselves, the Book is always within our reach. Ultimately both the far-flung Jew and the Torah will be joined.

What does the Torah mean when it tells us that it is not in the heavens? Isn’t that obvious? Aren’t we reading it here on earth this Shabbat?

Rashi explains that the Torah is telling us that if it were actually in the heavens we would have to find a way to retrieve it, bring it back to earth, and study it. Was Rashi, who lived in the Middle Ages (eleventh century), predicting space travel, or was he suggesting something else?

Perhaps an old Jewish story will help us better understand what the Torah is telling us in this Torah portion.

The tale is told about Reb Chaikel, a poor tailor from Lodz, who had the same recurring dreams. Each night his father would appear to him and tell him about a secret fortune. All Reb Chaikel had to do was travel to Vienna and go to the royal palace. Exactly 50 yards from the palace, his father said, was an old oak tree. Under that tree, his father told him, lies a great treasure. All Reb Chaikel had to do was dig under the tree, and all his financial problems would be solved.

At first, Reb Chaikel ignored the dreams, but they recurred night after night. And so, he decided to go to Vienna and seek his fortune.

He camped out near the palace and waited for an opportune time to begin digging for the fortune. At midnight on a moonless night, he stealthily crept up to the tree and began to dig. His shovel had not even had a chance to strike dirt when he felt a rough hand squeeze the back of his neck.

“Jew!” shouted the palace guard. “What on earth are you doing at midnight, 50 yards from the palace gates, shoveling dirt?”

Reb Chaikel had no choice but to tell the story of his dreams about the great fortune that lay beneath the oak tree that he was about to dig up. He even offered to split the booty if the guard would let him go. “You idiot!” laughed the guard. “Everyone has dreams. In fact, I myself dreamed that if I were to go to the city of Lodz in Poland and dig in the basement of some Jewish tailor named Chaikel, I, too, would find a fortune! Hah! Now get lost!”

Legend has it that Reb Chaikel returned to Lodz and, after a little digging in the basement of his own home, became a very wealthy man.

Sometimes we look at the Torah’s values and precepts and regard them as being way up in space, beyond our reach. We look at the Torah’s expectations of us as impossible tasks that are as difficult to achieve as landing on the moon was. We view them as hurdles that are impossible to overcome, as if we were being asked to travel to distant lands to perform difficult tasks.

The Torah assures us twice (Deuteronomy 30:11-14) that what it teaches us is within our reach. Even if a Jewish soul is lost in space, coming home to Judaism is always possible. And, we are told, the Torah, our manual of instruction, is more accessible than we may think. 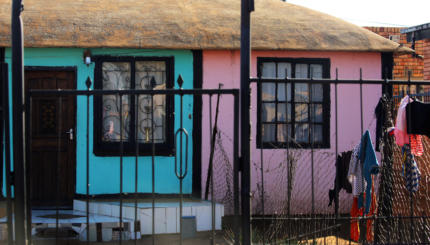 How the rabbis tried to make sense of this strange dream.