Parashat Beha’alotcha: The Grand March Toward the Good

In an article entitled “Gemilut Hasadim [Doing Acts of Lovingkindness] is Not Social Action,” Rabbi Arnold Jacob Wolf claims that many synagogue social action committees concern themselves not with their stated purpose, but with tzedakah (charity) projects, such as tutoring and stocking food pantries.

While these are worthy activities, the Torah repeatedly shows that social action demands more: It means attempting “profoundly controversial, deeply political, even world-historical” changes, in both the Jewish community and the larger society, which would ideally make such palliatives unnecessary.

The impulse to social action is rooted in our most sacred obligations. But carrying out that impulse can be daunting. Rabbi Wolf suspects that fear of splitting congregations, and of losing donations, is behind the unwillingness to “take up arms against poverty and injustice.”

Social action does carry risks, as Parashat Beha’alotcha repeatedly points out. Yet it shows how a dedicated, mutually responsible group can come to grips with those risks by consciously confronting them.

Facing a fear begins with naming it. Where we might be likely to hold a community discussion, our ancestors often used ritual to articulate both problems and solutions. In Beha’alotcha, the adult men of the tribe of Levi are formally assigned the ritual functions which the people as a whole forfeited by worshipping the golden calf. Their initiation requires that they be treated like sacrificial animals: representatives of the tribes lay their hands on the heads of the Levites, thus symbolically transferring responsibility. Next, each Levi, in lieu of being offered on the altar, is lifted up in front of it.

By becoming sacrifices, the Levites graphically state their awareness that giving one’s life to a sacred cause is dangerous. This remains true today: human rights and refugee workers, investigators of corrupt governments, organizers of opposition political parties in many countries, and organizers for unpopular causes in the United States take ill-paying jobs, live in dangerous areas, risk prison, face and sometimes meet death.

However, the initiation of the Levites is more than a collection of individual sacrifices; it symbolizes the entire tribe’s commitment to a shared purpose. Further, this tribe has faced fear before, and demonstrated willingness to stand and fight together. Because they know they can count on each other, the people can count on them for effective, consistent action.

Parashat Beha’alotcha also illustrates how dedication to social action can bring more intimate losses, such as separation from family and from many members of the society that stands to benefit. Putting oneself forward politically, whether as a professional or as a volunteer, also invites public scrutiny of one’s private life. This is an easy channel for the resentment of people who don’t relish the discomfort of change, even for the better, or who doubt the authority of those who undertake leadership.

Moses, the person most responsible for carrying out God’s plan to restructure society, is the Torah’s prime example of one who encounters these losses. He essentially gives up his personal life after encountering God at the Burning Bush, when he returns to Egypt. Throughout the rest of the Torah, he is never shown interacting with his wife or children, only with his brother, Aaron, his sister Miriam,and his father-in-law, Jethro.

Further, having become intimate with the Eternal, Moses find his frame of reference shifted to the seventh generation, far beyond that of the Israelites who feel keenly their lack of control over where their next meal is coming from. He prays for the multitude, but no longer shares or understands their fears and frustrations.

Finally, in Parashat Beha’alotcha, he finds his most intimate relationships become public issues and he loses, albeit temporarily, the trust of both his siblings.

Jethro leaves for Midian after spending two years at the Israelite camp. According to a midrash, Moses is left both socially bereft and professionally unsupported. Jethro had been Moses’ interpreter, the experienced leader, who understood ordinary people when Moses no longer did.

To make Moses’ job possible again, God appoints, and inspires, 70 assistants, leaders of the people who can interpret and apply the laws Moses receives. According to another midrash, all of these leaders had been overseers in Egypt, where they willingly took blame, and beatings, for failure to meet quotas rather than make impossible demands of those under them. As in the case of the Levites, a reliable group makes it possible to realized shared social ideals.

However some personal pain is inevitable, and impossible to share. According to an illuminating rabbinic midrash, the wives of Moses’ 70 assistants dressed up to celebrate their husbands’ new honor, but Moses’ own wife Tzipporah remained plainly clothed. When Miriam asked her why, she replied that it wouldn’t make any difference how she dressed, because Moses hadn’t touched her in years.

Miriam tactfully called Aaron to a family conference just outside Moses’ tent, where Moses and no one else would overhear her saying that if the 70 assistants could remain sexually active, Moses had no excuse for neglecting Tzipporah.

Aaron agreed. Moses, overhearing, knew that he was not master of his own time; rather he had to remain on call day and night. But he held his tongue. The reason the Torah gives is his humility, which also serves to protect his privacy.

In this case, no ritual exists to name or resolve the problem. Thus God personally overreacts on Moses’ behalf, striking Miriam with tzara’at (leprosy), which forces her exile from the camp.

Perhaps this excessive intervention is deliberate, a desperate means to reunite the Israelites, even in opposition to God. If so, it works: Aaron, Moses and the people immediately join together, focusing their many separate fears on God’s anger at Miriam. Aaron appeals to Moses, Moses prays for Miriam, and the people refuse to move camp until she can rejoin them. This is the beginning of a renewed solidarity among the threatened family, and between the family and the people.

Beha’alotcha makes no attempt to minimize fear and the inevitable risks of social action. Further, it reminds us that the Source of our obligations does not always act in ways that we find benign or even reasonable.

Yet it also depicts the continued triumph of mutual solidarity. When the group consciously and in unity names and confronts its fears, its members can carry out their responsibilities. In accordance with the Torah’s profound knowledge of human psychology, shared confrontation of fear works even when the threat is inaccurately identified.

Parashat Beha’alotcha, with its emphasis on sacrifice, reminds us, when we form social action committees and organizations, how serious is the responsibility involved. It was left to later generations to articulate the proportionate greatness of the reward. Another evolving staple of Jewish belief is that our ancestors’ lives prefigure ours: if the untrained generation of the desert overcame the fears that might have deterred them, so can we.

Acknowledging these stories as our own, we can proceed with a clear understanding of both the risks we may face, and the means to move beyond fear in carrying out the sacred imperative of social justice. 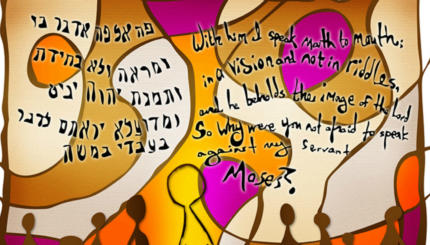