Today’s daf turns to various biblical characters for lessons about prayer. One figure that gets particular attention is Hannah, the barren woman who desperately prays for a son in the book of Samuel.

The biblical account describes Hannah’s raw outpouring of emotion to God over her failure to conceive. But the priest, seeing her lips moving but no sound emerging, thinks she is drunk and reprimands her, telling her to sober up. “No, my master,” Hanna responds, explaining that she is not drunk, only pouring her heart out to God.

The Talmud derives various laws about prayer from the story of Hannah, but perhaps the best-known is this: We should not raise our voices when we pray. In fact, Hannah is the source for the now common practice of silently reciting the Amidah, the central prayer of traditional Jewish worship.

We usually think of this mode of whispered prayer as one of humility and submission before God. But the Talmud turns in another direction altogether in recording an opinion that casts Hannah’s silent prayer in a very different light.

To what is this similar? It is similar to a flesh and blood king who made a feast for his servants. A poor person came and stood at the door. He said to them: Give me one slice of bread! And they paid him no attention. He pushed and entered before the king. He said to him: My lord, the King, from this entire feast that you have prepared, is it so difficult in your eyes to give me a single slice of bread?

Far from humble, Hannah’s prayer was like the poor person’s request at the feast — assertive, even aggressive toward God. One sage says Hannah “shot words” at God. Even Hannah’s apparent deference to the priest is re-read by the rabbis as insubordinate. “No, my master” is rendered instead as “Not my master!” — as if to say the priest could not possibly be a religious authority if he failed to recognize her heartfelt act of prayer.

Like the poor man, Hannah felt ignored and mocked in her desires, but she was not deterred. Instead of turning to priests and sacrifices that had thus far failed her, she turned directly to God.

In holding up Hannah as the model of prayer, the Talmud appears to be saying that prayer is not about being quiet and demure, but about stepping up and speaking out. From Hannah, we learn that prayer is about having the audacity to cultivate our voice and speak our hopes, our dreams and our truth.

Read all of Berakhot 31 on Sefaria.

This piece originally appeared in a My Jewish Learning Daf Yomi email newsletter sent on February 3, 2020. If you are interested in receiving the newsletter, sign up here. 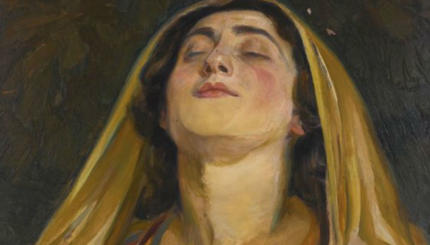 The model of prayer with kavvanah, or sincerity