This very issue is discussed in the Talmud, where Rabbi Meir says that anyone who eats non-kosher food cannot be included in the mini-quorum of three people needed for a public recitation of birkat hamazon (Berakhot 47b).

Maimonides repeated this view in the Mishneh Torah, going so far as to say that the blessings made in a birkat hamazon over non-kosher food would be reverted to curses (Berakhot 1:19). The Shulhan Arukh codified this position (Orah Hayyim 196:1), ruling that if one eats something that is not kosher he or she should not say a blessing before or after. This is the position that most traditional Jews hold today.

However, historically there has been a reasonable amount of pushback on this issue. Rabbi Avraham ben David (Ravad), a French commentator in the 12th century, ruled that if you enjoyed eating non-kosher food then you are obligated to say birkat hamazon afterwards (see his commentary on Maimonides Berakhot 1:19).

Rabbi Shimon ben Tzemah Duran (the Tashbetz), a Spanish rabbi who lived in the 14th century, argued that if you do something improper, such as eating non-kosher food, we don’t want you to compound the problem by also not making a blessing. According to the Tashbetz, eating non-kosher food doesn’t absolve you from the preexisting obligation to make a blessing before and after you eat (4:3:29).

Today, you’ll often find Reform temples where blessings are said over food that is not certified kosher, and may even be non-kosher. The Conservative movement does not advocate saying blessings over non-kosher food, but does not have an official responsum on the issue.

I did think of a good alternative for you: How about making sure to have one small tray of kosher food, including bread? Ask all those participating in the birkat hamazon to eat something from the kosher platter. As long as they’ve eaten something that is kosher, they are certainly obligated to say birkat hamazon. If you have a kosher bottle of wine on hand you can say the sheva berakhot as well. It’s not exactly having your (non-kosher) wedding cake and eating it, too, but it’s pretty close. 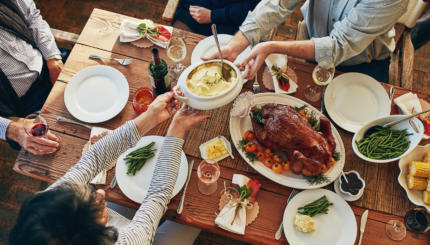