Here’s a riddle I used to ask: Why couldn’t our Patriarch Jacob daven (pray) in most synagogues? Because he was lame, and probably couldn’t climb the stairs.

I don’t ask that question so much these days, because most synagogues have taken steps to provide facilities for those with physical disabilities. Having presided over one such effort, I can testify to how a synagogue’s spiritual environment is improved by these changes.

In fact, it’s in the spiritual realm that the Americans with Disabilities Act (ADA) has made the greatest impact: As of 1998, houses of worship of all religious denominations were in greatest compliance–even though they were excluded from the act’s requirements!

Good for us! But before we break our arms patting ourselves on the back, let’s realize that there’s much more to be done. In fact, our history of excluding people with disabilities goes back to the Torah.

In this week’s Torah portion, we read the qualifications of a kohen, a priest: among those who are excluded is anyone “who is blind, or lame, or has a limb too short or too long; who has a broken leg or a broken arm; or who is a hunchback, or a dwarf…” (Leviticus 21.18-20)

Historians and biblical scholars suggest that this law was one of several which kept the priesthood untainted by contact with anyone who was not considered a “whole person.” (Among others, such persons included women and the poor.) Whatever spiritual merit may have been found in this practice, it had the effect of gross discrimination: any kohen born with or acquiring one of these conditions was out of a job.

We see another example in the Talmud‘s frequent statement that an imbecile, deaf person, or a minor lack legal status. Although later Jewish law mandated that the second category only applied to a deaf mute, people in both categories–as well as those with poor vision or learning disabilities–were usually not educated and often left out of synagogue life.

Some Examples of Inclusion

I grew up with a Jewish girl who was developmentally challenged and also severely visually impaired. While her younger siblings excelled in Hebrew school, the rabbi recommended that she not be trained for bat mitzvah. Twenty years later, she demanded the right to have one, and actually learned to chant a Haftarah (reading from the Prophets or Writings) and most of the service. She still lives in my hometown and attends services regularly.

When I went to my first pulpit, there was a 12-year-old boy who had learned nothing in religious school. He was mentally bright, but couldn’t do the work. Naturally, he was a behavior problem, and was considered a waste of time and effort by the teachers. I suggested to his mother that he be tested for learning disabilities. When he was found to have them, we were able to set up special learning situations for him. He suddenly excelled, and learned the material for his bar mitzvah in a few months. I wonder how many other “poor students” and “behavior problems” in our afternoon and day schools have actually had learning disabilities.

I recently became aware of a synagogue in Detroit that has had several bar and bat Mitzvah ceremonies for autistic children. Apparently they’ve established a reputation for sensitivity and skill in this area of special education. But why is there only one such synagogue in the entire community that can do this?

To be sure, there are wonderful examples of people and schools that have done fantastic work in educating students with various challenges. Rabbi Shlomo Williger, a mental health chaplain in New York City, specializes in helping Orthodox children with Down Syndrome. For many years, the Conservative movement’s Ramah Camps have offered the Tikvah program for developmentally challenged boys and girls. Rabbi J. David Bleich has published articles urging more sensitive treatment for deaf students, basing his position on responsa from acknowledged experts in Jewish law.

I fear, however, that these examples are simply the exceptions that prove the rule. Too many children and adults are excluded from meaningful participation in Jewish life because the community has not found ways to respond to their special needs.

It usually takes the persistence of one family to push the larger community toward grudging accommodation of their special needs. It is time for us to alter this pattern. Here are some suggestions for each synagogue or JCC to begin the process:

Parashat Emor concludes with the admonition, “There shall be one law for the stranger and the home born.” (Leviticus 24.22) If there is one standard of justice for all, it should apply to those who have historically been excluded. We should resolve to help every challenged Jewish child and adult find a place in the Jewish community.

The Childhood Friendship That Set My Life’s Course

This post is part of our series dedicated to Jewish Disability Awareness Month. Everyone has a passion and a calling. ... 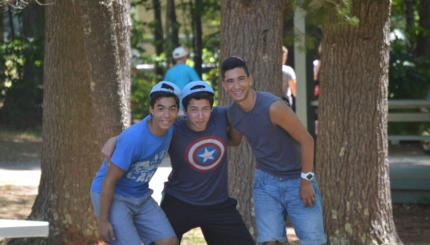