Excerpted with permission from the Jewish Women’s Archive (JWA). For more information on Anna Sokolow, go to JWA’s Women of Valor online exhibit.

“I felt a deep social sense about what I wanted to express, and…the things that affected me deeply personally [are] what I did, and commented on.”

Anna Sokolow was a dancer and choreographer of uncompromising integrity. Believing strongly that dance could be more than mere entertainment, she explored the most pressing issues of her day–from the Great Depression, to the Holocaust, to the alienated youth of the 1960s–and challenged her audiences to think deeply about themselves and their society.

A key figure in the development of modern dance in both Israel and Mexico, Sokolow worked in numerous countries, from Holland to Japan. She also worked with a variety of theatre forms; in addition to regular involvement with both Broadway and off-Broadway stage productions, she often experimented with combining dance, mime, and the spoken word into a single piece.

Sokolow frequently found inspiration in Jewish history and culture. Not only did her upbringing amidst the left-wing movements of New York’s Jewish immigrant communities shape her interest in social and political injustices, but biblical and modern Jewish figures, Jewish rituals, and other Jewish themes formed the basis of diverse compositions.

Sokolow’s compositions were generally abstract; rather than following a narrative structure, they searched for truth in movement and examined a broad range of human emotions. Exploring as they did many of the social, political, and human conflicts that characterize life in the modern world, they often left viewers feeling shaken and disturbed.

But even when dealing with the darkest of subjects, Sokolow’s appreciation of the dignity of the human spirit and its resilience in the face of trouble and despair was evident. As a reviewer wrote in 1967, “Miss Sokolow cares–if only to the extent of pointing out that the world is bleeding. I find hope in such pessimism.”

Prior to her stay in Mexico, Sokolow created only one piece with clear Jewish content, The Exile (1939). In part influenced by the strong role of religion in Mexican culture, she began to draw more frequently on Jewish history, religion, culture, and society in her work.

Many of Sokolow’s Jewish compositions explored themes of exile and suffering, as did her work as a whole. Her 1945 Kaddish, choreographed just as the Holocaust ended, drew upon traditional Jewish elements to express her intense pain and sorrow. Beating her breast and invoking tefillin by wrapping a leather strap around her arm, Sokolow created a heartwrenching manifestation of mourning. Her Dreams, premiered in 1961, was the first serious dance exploration of the Holocaust.

Yet Sokolow did not simply mourn for a lost culture and a lost population. Many of her pieces explored the Jewish people’s strength and courage in the face of great adversity; others commented upon Jewish religious and social traditions.

Sokolow based a number of works specifically on Jewish female figures, from the biblical Ruth, Miriam, and Deborah to the modern Hannah Senesh and Golda Meir. Her 1943 Songs of a Semite, named after a book of poems by Emma Lazarus, presented a lonely Jewish woman who gained strength from remembering the courage of several biblical women.

The Jewish community provided Sokolow with opportunity as well as inspiration. Not only did Jewish unions and fraternal organizations form many of her first audiences, but she premiered a number of pieces at New York’s 92nd Street Young Men’s Hebrew Association. Sokolow also staged festivals and pageants in support of State of Israel bonds and directed a synagogue service combining poetry and dance.

Sokolow never shrank from confronting her audiences with difficult realities. She searched for truth in movement, using dance to explore the broad range of human emotions and encouraging her audiences to think for themselves. “[M]y works never have real endings,” she said. “[T]hey just stop and fade out, because I don’t believe there is any final solution to the problems of today. All I can do is provoke the audience into an awareness of them.”

The conviction that “[a]rt should be a reflection and a comment on contemporary life” shaped Sokolow’s entire career. Always animated by an intense social consciousness, Sokolow believed strongly in the necessity of involvement with the world around her.

“The artist should belong to his society,” she wrote, “yet without feeling that he has to conform to it…. Then, although he belongs to his society, he can change it, presenting it with fresh feelings, fresh ideas.”

Sokolow died on March 29, 2000, at the age of 90. Her unique and powerful approach to her art left its mark on students and colleagues, from Robin Williams to Alvin Ailey, and countless amateurs and actors as well as professional dancers remember her lessons with gratitude and admiration.

Gerald Arpino, artistic director of the Joffrey Ballet, spoke for many when he paid tribute to Sokolow at her 85th birthday: “I became a dancer because of the pure joy and spirit of dance. I remained in the field ever since because such pioneers as Anna Sokolow showed me the deep commitment and intense humanism that dance is capable of expressing. Her indomitable spirit, her courage, her uncompromising truths are beacons not only for the dance world but for all humankind.” 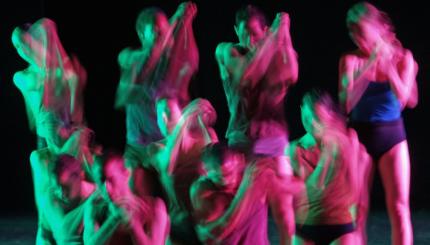 Turning away from tradition and establishing its own roots.