Each week during the Friday evening service, as we prepare to ascend from the weekday world of mundane obligations to the Shabbat realm of blessed rest, we encounter an ancient benediction: Ana b’Koach, an enigmatic prayer said to conceal a mystical formula for spiritual renewal within its plea for divine aid.

Ana b’Koach is believed to have been composed by Rabbi Nehunya ben haKanah, who lived in the early centuries of the Common Era and was known both for his meek and forgiving manner and for his adeptness in law and mysticism. The prayer falls in the Kabbalat Shabbat service after the recitation of six psalms (95 through 99, and 29) and serves as both a capstone of the seven days of the week — and a reflection of the entire sixfold/sevenfold structure of creation (more on this below).

At the moment when Shabbat bursts forth in our midst, this prayer invokes the creator of all as the ever-present font of life and blessing, and as the progenitor of the process through which we become partners in the renewal of self, society, and world. This process culminates in the onset of Shabbat, which occurs almost at the same moment the prayer is intoned.

It opens as follows:

We beg you! With the strength of Your right hand’s greatness, untie our bundled sins.

Accept the prayer of Your nation; strengthen and purify us, O Awesome One.

Please, O Strong One – those who foster your Oneness, guard them like the pupil of an eye.

On its surface, Ana b’Koach beseeches God to employ God’s might to free the captive, accept the prayers of the people, and safeguard and renew those who seek the shelter of the Divine presence. But the Jewish mystics see in the prayer the spiritual source code of creation itself.

Ana b’Koach is said to contain the 42-letter name of God, concealed in the first letter of each word in the prayer. The 42 words of Ana b’Koach are split into seven verses of six words each, and the first letter of each of the six words of each line are combined to form one six-letter Divine name, each of which forms aspects or attributes of the 42-letter name. In this conceptualization, creation is patterned after attributes of God, the week reflects the structure of creation and its creator, and the transition from creation to rest is the meeting point of the human and the Divine.

The symmetry of this structure is immediately evident when one simply looks at the prayer: 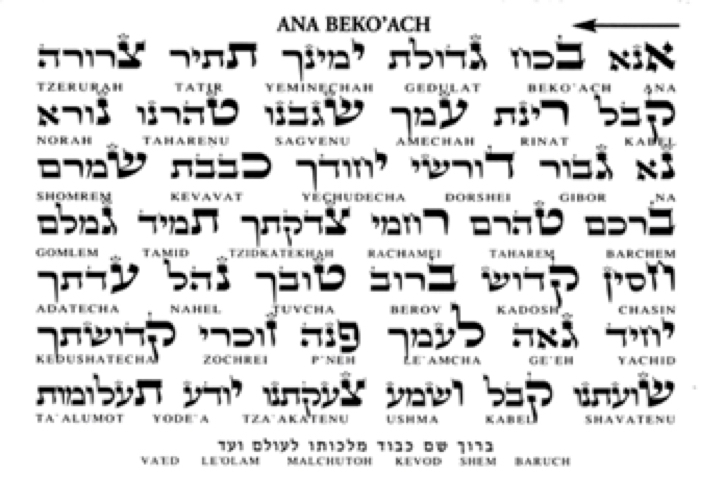 This patterning of sixes and sevens is fundamental to the Jewish view of the structure of all of reality. In the Torah, said to be the blueprint for creation, each column of text in the scroll comprises 42 lines. The six-and-seven pattern is also found in the story of redemption: Israel encamps at 42 locations during its long desert sojourn. The seventh day, on which God rested at the culmination of creation, becomes the precedent for the commandment to honor the Sabbath. For these reasons and others, Ana b’Koach is regarded in the mystical tradition as no less than a portal to the power of creation itself, and to creation’s source.

The medieval theologian and talmudist Hai ben Sherira, better known as the Hai Gaon (939-1038), identified each of the individual aspects of the Divine name contained in the prayer, and how those aspects related to the special characteristics of each day of the week. In some kabbalistic interpretations, the prayer activates the connection of the seven lower sefirot (or divine emanations) of the kabbalistic Tree of Life to the highest three, connecting physical reality to its metaphysical source.

This brief, powerful, symmetrical, elliptical prayer has been to numerous moving melodies, and is also commonly found inscribed, in whole or in part, on jewelry, artwork, or modern-day talismans. Although its mystical significance cannot be overstated, it is also rooted in universally recognizable human emotions, beginning and ending with expressions of the deeply human urge to be heard and attended to by God.

Ana b’Koach concludes with this:

Bless them, purify them, show them pity, may Your righteousness always recompense them.
Powerful Holy One, with Your abundant goodness guide Your congregation.

One and only Exalted One, turn to Your nation which proclaims Your holiness. Accept our entreaty and hear our cry, O Knower of mysteries. 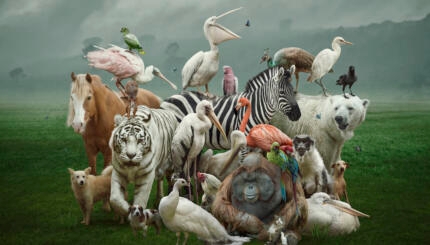 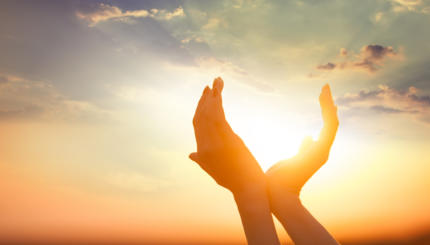 The Power of Jewish Blessings

More than mere expressions of gratitude, blessings are portals to other spiritual realms.

Aleinu: A Call to Divine Service

This prayer calls on us to discover where the brokenness of the world overlaps with our particular human gifts.