Kaufman describes traditional wedding customs, some of which may not be observed by the liberal Jewish movements and others like the Yichud (seclusion) Room or Birkat Hamazon (grace after meals) are observed differently.

Amidst singing and dancing, the bride and groom… weave their way through the congratulating guests to the yihud (seclusion) room. It is customary for bride and groom to be alone for a period of time immediately following the marriage ceremony.

The complete seclusion of the couple in a closed room is a public act symbolizing their new status as husband and wife. Since this act, more than any other, signifies that they are truly married, a public awareness of their seclusion is required, and it must be attested to by qualified witnesses. The witnesses remain outside the door to ensure that no one enters until the couple have been alone for a reasonable period of time. 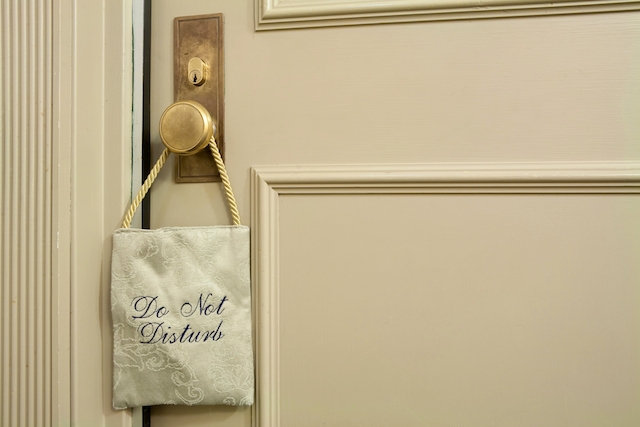 Yihud provides a period of respite for the newly married couple, an interval of tranquility for them to enjoy together in total solitude amidst the turmoil of the wedding. It is customary for the two to have their first meal as husband and wife together in the yihud room. Both will have been fasting all day, and this food will be their first of the day.

It is important that the yihud room be prepared before the wedding. It should provide absolute privacy. It should also have food for a light repast for the couple.

The wedding meal is a joyous feast, punctuated by lively Jewish wedding tunes and dancing in accordance with Jewish tradition. When bride and groom leave the yihud room to enter the banquet hall during the wedding feast, they are greeted and raised up on chairs by their friends, as the assembled guests dance around them.

It is considered a great mitzvah, in the category of chesed (obligatory acts of love for others), to cause the bride and groom to rejoice at their wedding. The Talmud declares that whoever gladdens the bridal couple is considered as if he had brought a sacrificial offering at the Temple in Jerusalem, or as if he had rebuilt one of the ruins of Jerusalem.

According to Midrash, God and his angels served as exalted exponents of this mitzvah when they participated in the wedding celebration of Adam and Eve and caused the couple to rejoice:

The Holy One, Blessed be He, made 10 wedding canopies for them in the Garden of Eden, of precious stones, pearls, and gold… the angels were playing upon timbrels and dancing with pipes… the Holy One, Blessed be He, said to the ministering angels, ‘Come, let us descend and render acts of love to the first man and his wife, for the world rests upon acts of love…’ And the ministering angels went to and fro, [dancing] before Adam…

Ketsad m’rakdin lifnei hakalah?–“How does one dance before the bride?”– asks the Mishnah. Following the example of the talmudic sages Hillel and Shammai, Torah scholars usually take the lead in actively participating in the dancing in honor of bride and groom. Friends of the couple vie with one another to enliven the festivities through acts designed to make the bride and groom rejoice at their wedding.

Grace After the Meal

Upon the conclusion of the wedding feast, Birkat Hamazon, Grace after Meals, is recited by the assembled guests, concluding with the recitation once again of the Sheva Berakhot, the Seven Blessings [recited previously in the second part of the wedding ceremony].

Two cups of wine are required, one of which is held while the grace is recited, and the other for the Seven Blessings. Like the earlier Seven Blessings recited under the huppah [wedding canopy], these may either be recited by the person who leads the Grace after Meals, or they may be treated as honors that are distributed among different guests.

The person who leads the guests in the grace then recites the blessing over the wine, pours wine from the two cups into a third one, and drinks from the original cup, while the other two cups are given to bride and groom to sip from them.

It is customary in some circles for those closest to the married couple to remain with them after the other guests leave and have a “mitzvah dance” with the bride and groom. Rabbis and other dignitaries take turns dancing with the bride, with the rabbi holding one end of a handkerchief and the bride the other. This custom, which may relate to the mishnah [a section of an early rabbinic legal code] that discusses “dancing before the bride,” is ascribed by some as a means by which the rabbis and scholars express to the groom their confidence in his choice of a bride.

The Week After the Wedding

In Jewish tradition, bride and groom do not embark upon a honeymoon immediately after the wedding; they remain for a full week (three days if it is a second marriage for both) to celebrate. These Shiv’at Y’mei Mishteh, or Seven Days of Feasting, are said to have been ordained by Moses, and are a custom that is thought to go back to patriarchal times. These feasting days serve as a focal point for communal rejoicing and for the couple to begin their married life together while in the lap of the community.

During the Seven Days of Feasting, the bride and groom do not work, nor may they be involved in business transactions of any kind. They only eat, drink, and rejoice with each other. Each day, close relatives or friends host the married couple for a festive meal, which is punctuated by singing and rejoicing. It is customary for the groom, if he is learned, to deliver a d’var Torah, a learned discourse. Again, in most cases, it is also customary for the groom to be interrupted with singing as he begins, so that he will not be shamed if he is not capable of delivering it.

At the conclusion of the meal, Sheva Berakhot are recited. A minyan, or quorum, of at least 10 adult males [or in liberal communities, 10 adults of either gender] is required for each meal, at least one of whom was not present at the wedding and at previous Sheva Berakhot for this couple.

Reprinted with permission from Love, Marriage, and Family in Jewish Law and Tradition, published by Jason Aronson Publishers. 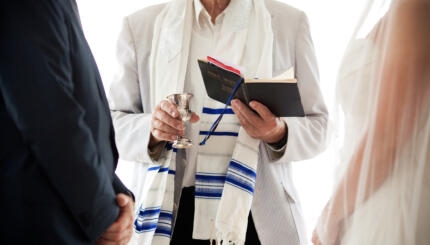 The Seven Blessings (Sheva Brachot) for a Jewish Wedding

These blessings are recited under the huppah and at celebratory meals for a week afterward. 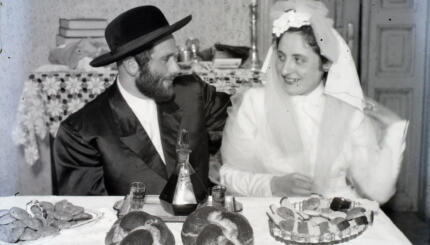 Nissuin: The Second of the Two Ceremonies

The substance of nissuin, the actual marriage ceremony, are seven blessings that reflect the themes of creation, joy, and bride and groom.