Here in Israel-Palestine, religion is certainly one of the sources of conflict between us, and religious holidays often provide the spark that ignites violence. Roots, the Israeli-Palestinian grassroots initiative for understanding, nonviolence, and transformation, is built upon the presupposition that religion can be – and must become – one of the foundations of reconciliation. At Roots, religious celebrations become focal points for the sharing of Christian, Muslim, and Jewish insight and inspiration, for the meeting of minds and hearts.

One year ago, during the Islamic month of Ramadan, when Muslims the world over fast from dawn to dusk, Roots conducted an impressive series of four joint break-fast (Iftar) meals. We managed to create an oasis of peace, a beacon of light to our surrounding societies, while intolerance and violence were brewing around us. Two days after the final Iftar meal, attended by over 130 Israelis and Palestinians, extremist forces again thrust us into a round of fighting that still echoes in both our societies.

This year, as the calendar brought us a rare confluence of Ramadan, Passover, and Easter, we all held our breath and prayed that we could somehow pass through this period in peace. Yet it was not to be.  A week before the new month, an ISIS-inspired terrorist killed Israelis in Be’er Sheva and a horrible yet familiar cycle was replayed before our eyes. With tens of Israelis and Palestinians killed, and the region teetering on the edge of a larger conflagration, everyone’s hearts were – and continue to be – anguished and on edge.

We are still living in a powder keg, in societies that are as separated and divided as ever, each living within their particularistic historic calendars and parallel news cycles that never meet. The hubris of exclusivity and insularity are killing us.

Yet we shall not be deterred or defeated. The work of meeting and standing together must go on. It is more important than ever. Despite it all – and because of it all – Roots conducted six wonderful interfaith Iftar celebrations during the month of Ramadan which just recently came to an end. We were able to bring together hundreds of Israelis and Palestinians – not just at our flagship location in Gush Etzion between Bethlehem and Hebron, but also at three of our four satellite centers, in the South Hebron Hills, in the Jordan Valley, and in Samaria on the southern outskirts of Nablus, with a myriad of local religious, political, and educational leaders in attendance.

Many attendees are, of course, already convinced of the importance of meeting and reconciling with the other side. Many – but not all! A large minority of the people come out of a hesitant curiosity. They are fearful and ensconced in the bubble of their own exclusivist narrative, but still open to experiencing something different. Many of them are blown away by the experience of being in the same space as the “enemy,” by an atmosphere liberated from fear, by finding someone on the other side they can talk to. Prejudices fall by the wayside and perspectives change.

There is enormous value for the ‘already convinced’ as well. So often, we in the peace camp, feel alone and beleaguered. We may begin to lose hope. But when we gather with other like-minded people from both sides and experience the joyful camaraderie of people from both sides who believe that a better future is possible and are actively working towards it, our hope and sense of responsibility are renewed. Our faith and resolve are strengthened.

To sit in the hills of South Hebron and hear young teenagers talking about the impact of actually meeting each other, and the need to dispel the prejudices that their classmates hold is powerful.

To hear leading Imams share the importance of expressing the path of peace and mercy in our religious traditions is powerful.

To hear ex-politicians and Oslo negotiators proclaim that these events are the real answer to the violence and that Roots’ work is society’s responsibility for a political peace process, is deeply gratifying and encouraging.

Seeing 80 Palestinians and Israelis at our final Iftar celebration, eating together, listening to words of Jewish and Muslim inspiration together, and praying the Jewish Prayer for Ramadan together, was beyond inspiring. It was quite literally a taste of the wonderful future of brotherhood that Israelis and Palestinians can enjoy if we only work hard enough to make it happen. At times like these, when fears and tensions are so pervasive, and all our past traumas are being re-awoken with each news broadcast, all of us who pursue peace in this Land know that we can do better, and we recommit ourselves to doing so.

During the first Iftar, our Palestinian co-director Khaled Abu Awwad and our interfaith activist Amir Tadmor took the stage to announce the creation of our new Jewish-Muslim Beit Midrash (study center and program). A significant upgrade to the Roots interfaith dialogue programs, the new Beit Midrash will have two foci: At the core will be an elite cadre of Muslim and Jewish scholars who will sit and study Jewish and Islamic sources together, delve into them, compare and contrast, and write both about the experience of learning together and about their insights and conclusions concerning the interrelationships between our two textual traditions. The larger concentric circle will be a public forum in which these scholars will present the results of their research to the wider Muslim-Jewish public and will invite reactions and discussion.

We fervently believe that the Beit Midrash will open hearts and serve as a bridge towards understanding Islam and Judaism as sister religions that complement each other and that can, and ought, to speak to each other. The program will further deepen religious reconciliation and will serve as a bulwark against fundamentalism and radicalization.

The story of Amir Tadmor deserves to be highlighted. He served in the office of Israeli Prime Minister Yitzchak Rabin during the years of the Oslo Accords, helping to shepherd them along. Deeply committed to the peace process and to Rabin himself, he was shattered by Prime Minister’s assassination, resigned his position, and left the realm of politics. Tadmor became an educator, and for two decades dedicated himself to working towards coexistence and a shared society. Less than a year ago he discovered Roots and now tells anyone who will listen that the way of Roots is the missing piece of the peace puzzle that he has been searching for all these years.  The bottom-up, people-to-people peace process must not ignore the centrality of identity, and specifically religious identity, in the Israeli-Palestinian conflict. People of fervent faith – and their religious convictions – must be brought front and center in dialogue and study. That is what we do in Roots, and indeed we have uncovered the foundations for a common language and for mutual recognition, empathy, trust, and true partnership.

We are incredibly grateful to Ohr Torah Stone’s Blickle Institute for Interfaith Dialogue for supporting our Iftar meals, and for all the work they do by bringing our religious traditions into meaningful, and respectful exchange in this twice-promised Holy Land.

This article was written with input from Shaul Judelman

Sept. 11 and the Second Intifada in Israel interrupted years of improvement in Muslim-Jewish relations. 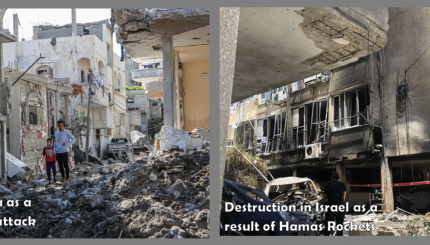