Ellen and Janis: A Love Story

What’s the first thing that came into your mind when you met each other?

Shana: The night we met, I was spinning records at a house party in Northeast Minneapolis. Beck and his friend decided to stop by on their way to another party, and I instantly noticed Beck when he walked in. Beck is totally my type: the androgynous/edgy-but-not-too-edgy-with-tattoos type. After I put on the next song, I walked over and introduced myself. Beck asked me if I was the DJ. I said “Yes,”and he replied, “That’s cool. I’m also a DJ.” From that moment on, I felt that the universe had lined us up for a reason, and we have been together ever since. Beck proposed to me a year-and-a-half later, and we got married on June 1, 2014.

Beck: The first thing that came to mind when I saw Shana was “I need to meet that person.” I could tell she was magnetic, powerful, had a great smile, and was obviously gorgeous.

Three reasons you love each other:

What makes you two compatible?

Shana: We have a very similar sense of how we want to live our lives. We both have a hard work ethic and share the same ideas on how to relax and unwind. We both love to travel and try new things. What makes us the most compatible is that we are sensitive and thoughtful of others, and we share the desire to nest and create family.

Talk about your personal history with Judaism and what Judaism means to you.

Beck: My personal history with Judaism goes back to about 6th-7th grade. I learned that my grandpa was in a concentration camp as a POW. He was German by blood (not my biological grandpa). He escaped with Jews and lived to tell about it. Though he didn’t talk much, I couldn’t help but focus on the number on his arm. At that time, I was learning about the Holocaust and reading Anne Frank, as everyone does around that age, and I found myself “soul connected” to the Jewish people. I grew up Catholic and never connected with my religion. I had always thought of converting to Judaism because of this soul connection. It wasn’t until Shana and I were together that I made that leap to convert. I went to Hebrew School and then met with the rabbis of the beit din for my conversion. I went to the mikvah the week of our wedding and officially converted the day before our wedding. Judaism for me is all about connection, asking questions, and social justice. Being a trans person, I have always felt accepted by my Jewish community and Judaism has always felt like home.

Shana: I was raised in a Reform Jewish household in Minnesota. I was teased and made fun of for being a Jew. My synagogue and Jewish community were places of solace for me. In high school, I got involved with NFTY, and it shaped and deepened my relationship to Judaism and Jewish tradition. I always imagined having a Jewish household, and being Jewish today means celebrating the holidays in our home and with our friends and family.

What does Judaism mean to your relationship? What traditions are you creating as a couple?

Beck: Judaism in our relationship feels important and intertwined. We are still learning together to connect to our Judaism as a couple. I know that I feel we are settled into the community in a very solid way. I follow Shana’s lead with respect to traditions. Since I didn’t grow up Jewish, it has been fun to see so many different ways to celebrate and honor the holidays. Of course we eat Chinese and go to a movie on Christmas day (I think that’s a given). And it is really important for us to spend time with our family around the holidays. If we aren’t with Shana’s family, we are with chosen family. And even when we moved here to Boston and we didn’t really know anyone, we were invited to a queer Passover of folks we just met, and it felt like home. So we are still working on our traditions at this point I would say.

Shana: Judaism is very important to our relationship and we love celebrating and also hosting queer Jewish parties and events. Our traditions are mostly around holidays, food, and community.

What’s a time when your partner supported you and helped you get through something difficult?

Beck: Coming out to my family as trans was probably the most difficult thing I’ve done while in this relationship. My family isn’t as connected as Shana’s family is, and she was so kind and loving along the way. Albeit, she was a little pushy for me to come out, but it was a gentle push. I probably would have never come out and would have just showed up one day with a beard. But her insistence on honesty in the family is important. She guided me through and we came out the other side together, a little bruised and a lot more free.

Shana: Beck has supported me through many challenging career transitions. I would say that he has unconditionally loved me, listened to me cry, and supported my decision to leave jobs when they are not a good fit.

What do you want to remind your future selves at age 80?

Beck: I want to remind us of how much we went through in our early relationship. And how we came out just fine even through all the moves, jobs, and transitions. I want to remind ourselves continually of the first night we met and how random and fun it was.

Shana: That we were cool and good-looking.

What are some of your favorite things to do together?

What’s one of your happiest memories?

Beck: My happiest memory with Shana is our wedding day, without a doubt. Seeing her walk down the aisle was a memory that is forever in the forefront of my mind. She was so radiant that day. Little did I know that morning that her contact had ripped, and she didn’t have any more and so she couldn’t see me!

Shana: Our honeymoon in Barcelona was pretty amazing. One day we decided to go to the top of Mount Tibidabo. We took a train, to a tram, to a funicular. Hours later we were dangling above the city on a vintage Ferris wheel with the most breathtaking panoramic views of the entire city. It was very romantic and epic.

Anything else you want to add?

We have two really cute dogs named Scout and Tootsie. 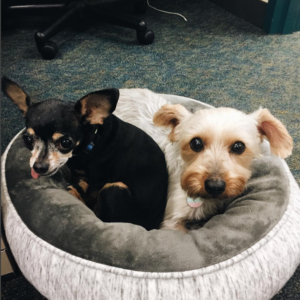 Falling in Love While Demisexual and Jewish

This month, in honor of Valentine’s Day, Keshet is sharing love stories. Last week we heard from Aden and Josh, and ...

Celebrate All kinds of Love with our Queer Jewish Valentines!

This month, in honor of Valentine’s Day, Keshet is sharing love stories. We heard about a proposal at a Pride Parade from Aden and ...

On Love and Parenting

This month, in honor of Valentine’s Day, we are sharing love stories. We kicked things off with a two part series ...