There’s No Such Thing as Closure

How Tech Innovation Both Defines and Challenges Our Identity

I enter the kindergarten where the children are waiting in anticipation. Before I have a chance to say a word, one of the children yells out, “I don’t understand. How is it possible that all the dinosaurs came to be, lived millions of years and then became extinct? Just a few weeks ago we learned from Torah that the world was created in six days and then God rested? One of these stories just can’t be true.” Is the Torah story true or is it that one about r…r…revolution?” “It’s not revolution. My mommy says it’s called evolution.” “Yeah, that’s it, but which one is it Rabbi?”

A beautiful young girl said, “My Mom told me there are two camps. In one camp there are the people who believe in evolution; that we became human beings, starting as a tiny piece of dust, and turning into gorillas and then into people. In the other camp, there are those who believe the story of Creation in the Torah. You know, how God created light and darkness and grass and fish and cows and dogs and people … all of it in six days and then God got hungry and thirsty and tired, so God had some juice, challah, and then took a long nap called Shabbat.”

They sat staring at me, waiting to see how I would resolve the dilemma. I tried to explain to the children that perhaps both answers are true. I attempted to allow them the possibility of experiencing the mystery and miraculous nature of a higher power, while not robbing them of the brilliance that science has delivered to our world.

When I finished, I saw many intent faces trying to understand what I was saying. Taking a deep breath, “Do you guys know what I mean?’ A little boy in the back of the group raised his hand and said, “Rabbi Matt, I don’t understand anything you just told us, but I know that I don’t agree with one word that you said.”

The story is sweet but also insightfully telling. Why is it that this question arises year in and year out? Our children are asking the most existential question possible. How did it all begin? Where do we originally come from? It makes sense. At five or six, children are not far from creation themselves. They still taste it.

As adults, we don’t seem to ask questions about the mystery of origin.

So, how did it all begin? Where do we come from? How was the world created? And, why should we be so interested?

When we start to look at creation, we begin to get closer to something of ultimate importance … what is it that we’re doing here in the first place? What meaning do our lives have? What is our purpose on earth? Asking the questions of creation and origin begs the question of our purpose.

Jewish tradition teaches that each of us is born with an actual and innate reason for being here on earth. We are as natural as every other piece of creation. We beat with the same cosmic cadence as everything else. Like rain gives us water to drink and plants give us oxygen to breathe, each of us has that same kind of existential purpose in the cycle of our lives. Our purpose is as simple and seamless as the way the rest of creation functions. However, our paradox as human beings is that we have to understand our purpose, believe in it and then intentionally utilize it regularly.

The world of positive psychology teaches us that we reach our greatest levels of fulfillment when we act at our highest levels of competence. Too often, we spend our time doing that at which we are not good, while not doubling down on that which comes to us naturally.

What are you naturally great at? What comes to you as innately as the leaves that grow on the trees; or the waves that continuously crash against our shores?

Life is complex. But certain aspects come to us more naturally and simply than we think. Plugging into the natural order and finding our purpose make bring us levels of joy all of us so deserve.

My kindergarten children are on to something every fall when then inquire about the creation of the world. Ultimately they are fascinated because they are asking about their very purpose for being alive. At a young age, they realize they are vital to the workings of our world. And perhaps, our days can be filled with more meaning when we remember the same.

Being Imperfect is Spiritual

I was moved recently in speaking with one of my new students in the Religious School hallway looking sad. I ... 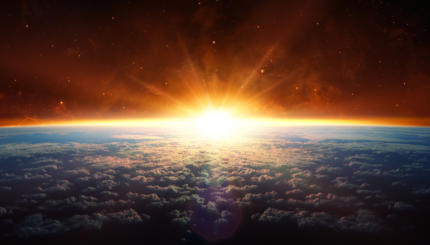 Recognizing that Creation and many natural phenomena are clouded in mystery can actually enrich our lives with meaning.

The Science Behind Children’s Spirituality

My 19-month-old daughter loves watching for school buses. She camps out on our couch, eyes eagerly scanning for any sign of yellow, and ...