What I Want For Validity

Until my grandfather’s death in July, I’d only attended one funeral. It was for a friend’s father in the seventh grade, and while I grieved for my friend, I didn’t understand the gravity of the situation, or what going to  a Jewish funeral really meant. I visited her house for shiva, paid my respects, and returned to my own home, putting the entire event out of my mind. It never occurred to me that all the Jewish rituals she observed in the following days were put in place for a reason. I didn’t understand that they were there to help one grieve.

Losing Poppy, my grandfather, this summer was a huge blow. I knew it was coming, but this was my first time truly experiencing loss. I’d always been close with my grandparents, despite living far away, and Poppy’s crinkled smile and enthusiasm for great eats were features I never realized would someday no longer be there waiting for me.

I flew out to Chicago the day before the funeral, meeting up with my mother, her siblings, and my cousins. While family reunions were usually a joyous (if not chaotic) occasions, this was a different type of gathering, and my mother’s trembling chin only served to remind me of the real reason we were brought together. I grieved for Poppy, but I soon grieved a little for myself – being with my family again reminded me that very few, if any, of my family members would respect or remember my pronouns.

Coming out to my friends as non-binary in 2014 was easy – as it turns out, many of them already used they/them pronouns for me in their heads. But coming out to family was a different affair. Despite being lesbians (separated), my parents were confused, for the most part, and unfortunately placed their own preconceived notion of grammar over my pronoun preferences. After experiencing a similar reaction from aunts and uncles, I didn’t have high expectations for coming out to my grandparents, yet another generation removed.

When I brought it up with my grandmother, Grammy, I wasn’t sure I’d been able to get the point across. I explained about what being non-binary meant, how it made me feel, and that I preferred to use they/them pronouns. I was still her grandchild, I told her, just not her granddaughter.

Grammy’s reaction was similar to my parents’, although with more senility and a topic change immediately thereafter. The conversation moved on to her opinion on my haircuts (too masculine), and I figured the moment had passed; she would never really understand.

Two weeks later, I received an envelope in the mail from her. Inside was a newspaper clipping titled “Transgender students find safe spaces at New College” from the Sarasota Herald-Tribune, March 20 2016, with a note attached that said, “Saw this and thought of you. Love, Grammy.” It made me realize that while she probably still didn’t understand, she heard me; and that was enough.

I wanted to tell my grandfather, Poppy, the next time that I saw him, but the cancer won before I had the chance to.

Sitting shiva in Grammy and Poppy’s house, emotions swirling, I tried to identify what I was feeling. A large part was grief, of course. But I also fought off waves of anger, of frustration; if my grandmother, who was halfway through her ninetieth decade on this earth, could at least hear what I told her and remember it enough to think of me later on, why couldn’t her children make the same effort? Why couldn’t my parents, one of whom was fired for being gay, even try to change their ideas of what made proper grammar? Was it worth invalidating me just to hold on to a language rule?

As my thoughts tumbled around in my head, interspersed with sudden pangs of remembering that Poppy was gone, I realized that I might seem hypocritical. Here I was, pleased as punch that my grandmother had even registered what I told her about my gender, but simultaneously frustrated that my parents refused to even try to change what pronoun they used for me.

If I had to hazard a guess, I’d say my experience of different expectations for different generations is one that is shared by many of my LGBTQ peers. From our friends we hope, sometimes expect, total acceptance. Many don’t have to change their ideas of gender or pronouns because they already have friends who’ve come out to them. From our parents we expect an effort to change, and while it’s not an effort my own moms are willing to put in, hopefully others’ parents will. And from our grandparents I think we just hope for a listening ear. They’ve been through so much compared to us, and I think we can only ask for a smile and their love.

While I didn’t get the opportunity to tell Poppy about my pronouns, I’d like to think he would have smiled and hugged me tight. He may not have understood, or even ended up remembering the details, but I know he would have loved and accepted me for who I was. And from our grandparents, that’s all we can really ask for.

Coming Out for Two

In honor of  National Coming Out Day , Keshet will be sharing and celebrating coming out stories throughout the month ... 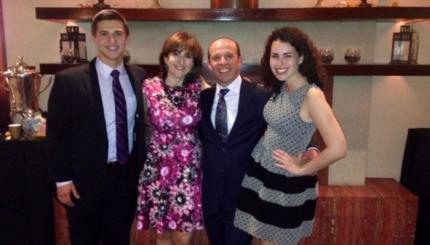 Over the summer, I traveled to Greenville, Mississippi for one of my Education Fellow visits to Hebrew Union Congregation. Before ...

Coming Out to Grandma

I never thought of myself as the type to lie to my grandmother. She’s always been my biggest fan. When ...