All I Want is the Truth: Rip Off the Masks and Gimme Some Truth

I have enjoyed a number of rousing conversations with more traditional colleagues about evidence (or lack thereof) of Divine revelation at Mount Sinai. Some hold as irrefutable proof of this sacred moment that hundreds of thousands of Israelites assembled at the mountain’s foot. I ask what sources – apart from the Torah – can establish that anyone was there at all. We pound the table in intense but friendly debate over core truths within our systems of belief.

So much is at stake. If one could prove that Torah literally came from the Divine to a person named Moses, who transmitted it to other leaders and on to the rest of the Israelites, I might not remain a Reform Jew. If one could prove that Torah was never transmitted by God to the Israelites at all, my interlocutors might not remain Orthodox Jews. But I have yet to wield such compelling evidence – and neither have my colleagues.

After multiple iterations of this conversation, I can’t help but think that our process of inquiry is flawed. We are pursuing ‘truthiness’ (to use Stephen Colbert’s term) instead of ‘Truth.’ We start with ideas that feel right to us and then build justifications around them, rather than exploring with openness what might actually have taken place those thousands of years ago or inspired the text of our Torah as the written basis of our culture and religion.

In a sobering analysis of politics, the London Economist recently suggested that we might be entering a “post-Truth” era, in which feelings matter more than facts and truth has been utterly debased:

Today a growing number of politicians and pundits simply no longer care. They are content with what Stephen Colbert, an American comedian, calls “truthiness”: ideas which “feel right” or “should be true”. They deal in insinuation… and question the provenance, rather than accuracy, of anything that goes against them…

I fear that we might likewise be experiencing the same in religion. My former professor, Rabbi Dr. Lawrence Hoffman, years ago put this phenomenon in more nuanced terms for his class on liturgy: “We are moving into a neo-Romantic period” in which facts matter less than our feelings. We want to feel something more than we want to know something with certainty. This is true of mainstream culture, and increasingly true within the Jewish community, as well.

Yet Diaspora Jewish communities have long espoused counter-cultural values, which set us apart and kept us together. During the inward-facing European Middle Ages, we engaged in global trade. During the Enlightenment, we re-articulated particularism and re-framed universalism. Now, in the Information Age, I wonder if our greatest counter-cultural contribution could be one of unflinching inquiry and open uncertainty.

The deluge of information in our time is now associated with its devaluation. Perhaps we could become (or remain) a community that values sorting through it all with care and an eye towards pursuing enduring truths.

Image used in this article is by Khaydock, via Wikimedia Commons

I want to share the chorus of one of my favorite Indigo Girls songs with you:So we’re ok, we’re fine, ...

As of this writing, the following topics are trending on Twitter: Jason Collins #talkaboutyourcrushnight Pacific Rim #SexyThingsGirlsDo #confessionnight #SC1 Nancy ... 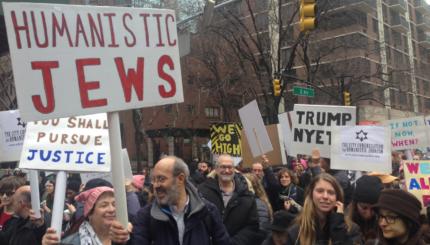