How My Dog Teaches Me About Judaism

In my second year of rabbinic school, I was asked to officiate at the funeral of a friend’s dog. I am embarrassed to admit that I thought of the request as a bit foolish. I hadn’t officiated at a human being’s funeral yet and my first funeral was to be one of a dog? I wasn’t sure what Jewish law said on the matter. I wondered if I was acting in a sacrilegious manner.

I did it. I gathered some words together and allowed my friends and more importantly, their children to reflect on the life of their dog. They spoke beautifully and tearfully about their sweet canine connection. Out of young insecurity, I still felt a bit awkward about the whole thing, but I remember how much it meant to the family who said they had no other path to closure.

All of these years later, my family and I had to bid farewell to our black Lab of almost 15 years. Cooper was a real part of our family, and there was no question that we were going to have a funeral. The only difference here was that we made sure to do so with Cooper in attendance. Before my wife and I took Cooper on his final ride to the vet, we held a service in honor of Cooper. Our kids took over the role of rabbi. My son and one of my daughters wrote a song in his honor. And our other daughter gave a few lines of eulogy to her childhood pet. My wife and I also wrote eulogies (unbeknownst to the other).

We all cried a bit. We laughed a lot. Cooper wagged his tail, as always, loving the affection. We got the closure we needed. We didn’t read Psalms or say Kaddish (although I would not have been against it), but we ritualized to say goodbye…and our family needed every bit of it.

I once negatively judged the idea of ritualizing a farewell to an animal. Too many of us judge what is acceptable and not in terms of religion, instead of responding to the manifest spiritual needs around us. Nothing is a sacred as human life, but other souls call out to us as well.

I invite you to read my eulogy below and watch and when the time comes for you to bid farewell to your beloved pet, perhaps you might do the same. It really does help.

Growing up, Lauren and I both had dogs…..dogs we really loved. So it was easy for us to figure out that we wanted a dog when we got married. In fact, I tried to get Lauren to get one before we got married. We didn’t, but we already knew the name of the dog we would get after our wedding. Lauren came up with the name “Cooper”. As soon as she suggested it, we both knew that would be the name of our dog.

We really searched for Cooper. We wanted it to be right. We wanted to feel like he would be a part of our family.

I will never forget when we picked him up. He was Cooper through and through…… Sweet, loving, kind, affectionate and stubborn. He fell for us immediately and us, for him.

He gave us our real first test of care giving as parents. I know many think that is a silly notion, but until one owns a puppy, one has no idea the commitment and responsibility. Living in Manhattan, we kept a schedule to be sure that one of us was with him daily in the dog park for forty-five minutes. We made new friends there and so did cooper. We hung out with the “dog park crowd”….some unique characters and prototypical New Yorkers. We enjoyed how famous actors and the rest of us alike were made equal by our connections to our sweet pets.

Cooper loved to run and fetch for what felt like eternity. As tired as he became, if we were willing to throw again, he was game.

Lauren and I were in love and we loved Cooper. Only dog people understand how much time people could spend with their dog. Only dog people understand that there is a real relationship with one’s dog. Cooper knew when we were happy and sad; when life was complicated or easy. He knew when to approach and when to stay away. He was protective with a loud bark, but never, ever bit a soul. He never learned to take food calmly….no, he grabbed food with a snap, as eager an eater as his Dad!

He was scared of lightning and would come flying up the stairs to hop into bed to be comforted by us. As well, he intuited when one of us was away from home….and then too, he would come up stairs to keep one of us company. As a puppy, he wouldn’t just come and lay with is, but he would extend his paws so he could lie between Lauren and me, so he could be cuddled also.

Cooper loved to swim in almost any body of water. He loved to wrestle, play “pull anything out of our hands”, run, eat and eat and eat; and of course sleep it all off. He loved going away with us; and especially knew when he was in Kent, CT; at my sister and brother-in-laws’ home…..he adored the vibe for so many reasons!

He was really stubborn. If he didn’t want to get into a car, elevator, whatever, he would set himself down and put all of his weight into his stubborn stance. We had to literally pick his 80lbs off the floor and move him. He mellowed in his older years.

Cooper was stunning. As a puppy, people regularly stopped us to ask us about his looks and where we got him. Sometimes, I thought people were stopping me to comment on the beauty of our actual babies in their strollers, but often times, they were stopping to comment on Cooper…..and as good looking as our kids are, that’s saying a lot!!

Our kids loved Cooper, but he was really our dog. He was a part of our fabric before they came into the world, so they just saw him as part of it all. We were lucky. He was never jealous of any of their arrivals. In fact, as they explored him, pulling and prodding….he just allowed them to know him….he patiently kissed them and allowed them to share his Crate whenever they explored and even when they locked him out. During these last weeks, knowing he was soon to leave, they couldn’t stop loving and hugging him. This was the dog of their early years of life and they will never forget him.

Lauren and I are so lucky to be married to each other and we both know that Cooper was an integral part of our connection…and always will be. We considered him family. We missed him when we were away from home and he will always be in our thoughts and hearts. He was our best and favorite dog in our lives. We will get another…..but we both know on so many levels that there will never be another quite like Cooper. We were incredibly lucky to have him.

Cooper loved my parents. In my mother’s sickest moments, Cooper would come over and sit with her, almost like he was guarding her as she took her pills and did whatever she needed to tend to herself. He would lie against her legs and wrap
himself as close as he could. The same when my father would come to visit in his last years. As my father disconnected because of his dementia…..and others were not sure how to engage him in conversation, Cooper would go to sit and play and offer love. He wouldn’t leave his side.

So now that Cooper has left us, I believe he is free, running with my parents, being loved by them and him, showing the same in return.

14 1\2 years, Coop!!!!! We were really lucky to have you so long. You had a great life, with little illness and a family that adored you. We will miss you a lot and you will always be remembered as long as we live.

A Dog at the Seder

As a child, the great Jewish philosopher Emmanuel Levinas noticed that dogs appear in Torah at a crucial moment. On ...

We have all seen some great Vaudeville or movie clip of someone being caught unaware, getting acquainted with a 2 x 4 ... 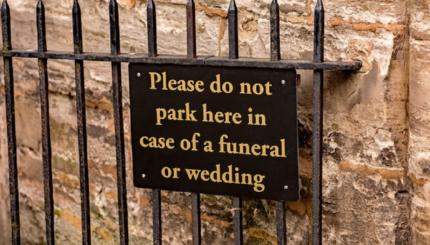 Three Funerals and a Wedding

“Our life is a walk in the night, we know not how great the distance to the dawn that awaits ...