“Everyone has a different tolerance for complexity.” This is a concept that was introduced to me in anticipation of adopting my son in 1997, and it has stuck with me over the years. Tolerance for complexity is not only a predisposition towards the way one approaches life, but is also ideally constantly evolving. There is accommodating the change that happens whether we want it to or not, and then there’s the change that we actively seek in order to achieve our goals and make the world a better place.

When Gary and I decided to explore adoption we already had biological children. My only criteria was that I wanted a baby. Beyond that, I felt it was beshert or “meant to be,” reflecting the expansiveness of adopting — that anybody could be your child. That meant, given the odds, we would probably end up with a child of color and likely a boy, because they tend to be at the bottom of the adoption hierarchy. I realized that the race of the child would not matter to me.

Much to my surprise, Gary voiced some trepidation. He explained that after getting his PhD in city planning from University of California, Berkeley in the mid ’70s, he moved back to his hometown of St. Louis where he was an expert witness for the NAACP in housing discrimination. His research was cited in a recent analysis of the public policies at the root of [police brutality issues in] Ferguson, Missouri. It confirmed what was once conventional informed opinion — that government, not mere private prejudice, was responsible for segregating greater St. Louis.

However despite his efforts, Gary lost many friends and colleagues as the Black Power movement evolved, eclipsing much of the racial cooperation that defined the early Civil Rights Movement. Adopting a black child felt risky. He expressed concern that we would unwittingly be caught in a black-white racial binary and in jeopardy of experiencing a similarly painful loss.

READ: The Complicated History of Black-Jewish Relations in America

But I forged ahead, driven by the same imperative I had experienced in giving birth to my other children. As predicted, we adopted a healthy beautiful black baby boy, who changed my life forever in ways I could never have imagined. Other activist adoptive moms I have connected with, like Rabbi Susan Silverman and Jillian Lauren, all articulate an expansiveness and sense of embracing humanity that is part and parcel of adoption.

The other conundrum we faced was a lack of familiarity with other black Jews. We were concerned our son would be forced to choose between his religious and racial identities. We conducted the seminal Study of Ethnic and Racial Diversity of the American Jewish Population. One of the primary findings was that Jews of color tend to feel a sense of isolation some never having met another Jew of Color like themselves. In response to focus group participants who wanted to gather again, we created Be’chol Lashon in 2000.

From a personal perspective, Be’chol Lashon has proved to be successful. My son has many racially and ethnically diverse Jewish friends and role models, and feels comfortable in a variety of Jewish spaces. He loved his recent FJC Cornerstone Conference for camp counselors, representing the multi-racially inclusive Camp Be’chol Lashon — even though he was one of very few Jews of color.

However, on a community level there is still much work to be done. The need for Be’chol Lashon’s work to create a racially and ethnically inclusive Jewish community is greater than it has ever been. Effectively wrestling with issues of race that have emerged as a part of the national agenda requires nudging people out of their comfort zones in safe and productive ways. I am constantly challenging myself to better understand how to accomplish that.

Communal change occurs as the sum of its parts — individuals community members stretching themselves. I know personally how impactful challenging oneself can be to communal engagement and growth. As a teenager, I discovered that I did not like traveling in large groups. So this spring, when I was invited to go on the San Francisco’s Federation’s Rabin Community Building Mission to Israel with other professional and lay leaders, I knew that it would also be demanding. Not surprisingly, the 10 days were extraordinary. It was inspiring to encounter a myriad of community-building efforts on the ground and to experience the courage characteristic of building a new country — from providing resources to help young Bedouins build experimental farms in the Negev, to honoring the ancient and contemporary diversity of Jewish religious tradition through Yair Harel piyut (liturgical poetry). Since the trip, I continue to connect with fellow travelers to grow and strengthen Be’chol Lashon.

This past weekend, I pushed myself intellectually. I had the privilege of attending the inaugural meeting of the Afro-Jewish Studies Association at the annual Caribbean Philosophical Association conference (CPA) with Hebrew Union College (Reform) rabbinic student, Isaama Stoll. The CPA, was one of the most diverse yet joyfully cohesive spaces I’ve ever encountered,reflecting the spirit of founders, Jane Gordon and Lewis Gordon. New ideas and frameworks expanded my understanding of race, Judaism and humanity at every turn.

Pushing boundaries is something I’m familiar with and have been doing all my life. Adopting my son Jonah pushed the boundaries of our family and  community. The Israel trip helped me develop a greater tolerance for the complexity of Jewish communal life through networking and partnerships. The CPA expanded my expectations of achievement and provided a model of best practices in terms of race and holding multiple identities. When we bring kids to camp this summer, we will advance expectations of what camp is, of what Jewish is. We encourage the kids to explore their multiple identities, take on leadership roles and connect with each other. Pushing boundaries is also what we do when we do trainings with Jewish groups, learning how to talk about race and making the case for a more generous and expansive interpretation of Jewish peoplehood. Change is not necessarily comfortable, but pushing myself out of my comfort zone ultimately feels tremendously freeing and empowering.

White rabbis are talking about race. Over the last few years, sermons about race and racial issues have come to ... 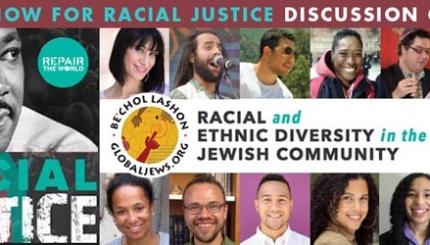 How Can Jews Talk About Race?

Over the last few weeks, as America waited for the Grand Jury decisions in the deaths of Michael Brown and ...