Ok people have you been watching “Full Frontal with Samantha Bee”? For heaven’s sakes, why not?!? During this election season, I have heard many people opine about missing Jon Stewart and his brand of political satire. Samantha Bee has picked up the mantle and then some.

Watching her show for the first time, I have to admit I was surprised. Surprised at how un-apologetically feminist and in your face she is. In a year in which Hillary Clinton is running for president and lots of ink has been spilled on different facets of women’s leadership, I am curious as to why no one has turned to Samantha Bee as an example of female leadership. She is brash, in your face, smart, opinionated, angry, and clearly powerful as she struts across her stage. All of this is “normal” in male leadership, yet different when a woman does it. This is not how one would traditionally define female leadership characteristics. Apply these same words to Hilary and you see how they would be read negatively.

Yet, Samantha Bee is the kind of role model we need, especially now in this election year. We need women who are brash, who react strongly when confronted with political opinions and ideas they disagree with. We need women who name our larger culture of misogyny and sexism. In a recent piece about Seattle’s city council voting down the idea of building a new sports arena, Bee noted that the vote divided along gender lines. All the women voted to spend the tax revenue in keeping jobs at Seattle’s busy sea port, while all the men voted for the stadium. She then listed all of the invectives hurled at the female city council members on social media calling for them to be violently attacked and raped, adding a “joke” that the older a woman was the less likely it was that men called on her to be raped. Oy!

Bee names painful truths in our society. Where Hillary is walking a tightrope to get herself elected, Bee jumps right over the line. We need more women like her. Only when her brand of leadership is seen as also being “feminine” then will the imaginary leadership differences between the sexes be erased.

Gender is defining this election cycle like no other. If that is the reality, then let’s name it and put it out there. Bee does this better than anyone else in media or politics today (They are the same thing now aren’t they?) So I say, Samantha Bee for President!

The 1909 ILGWU strike established a precedent for serious collective action in other branches of the garment economy. 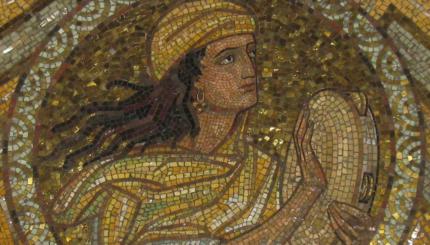 Miriam's skin condition and the war with Amalek, Amnon and Moab are all examples of memory.