It’s pretty clear that Judaism doesn’t like the idea of gossip. In fact, the Hebrew phrase for gossip is “lashon hara,” “the evil tongue.” “The evil tongue kills three people,” the Talmud teaches us. “The gossiper, the person who listens to it, and the person about whom it is said.” (Arachin 15b) As the Rabbis further remind us, in  many ways, gossip is worse than stealing, because while you can repay what you’ve stolen, once you harm someone’s reputation, that harm can never be undone.

But in fact, gossip might have been crucial in our evolutionary development. We human beings are not just social, we are what’s called “eusocial,” meaning that we need to work with others in large groups in order to survive. After all, if you were living on the African savannah, good luck trying to take down a large wildebeest or a speedy antelope all by yourself!

But the downside of requiring cooperation is that there will always be free-riders. So our ancestors had a problem — how could we ensure that people did their fair share? The answer: gossip.

[G]ossip could be important in establishing and communicating an individual’s reputation, and a good system for monitoring reputation can, in turn, help foster cooperation. Even if you’ve never transacted with a particular vendor on eBay, for example, you might be willing to do so based on the feedback provided by others. And correspondingly, knowing that a selfish act might be communicated to others — and thereby damage one’s reputation — could act as a deterrent, thereby fostering better behavior. (Indeed, one study found that the threat of gossip led people to act more generously in a game that involved allocating potential funds to others.)

So perhaps calling gossip “lashon hara” and translating it as “the evil tongue” might not be fair to the true purpose of gossip — after all, it can serve a real purpose.

Interestingly, there’s even a precedent in Judaism for rethinking a phrase that  has “evil” connotations — the yetzer hara, which is often translated as “the evil inclination.”

If we call the yetzer hara “the evil inclination,” then our natural inclination would be try to eradicate it. After all, who wants to be associated with something evil? But as soon as we call it “evil,” we also lose sight of its value. Indeed, there’s even a text that says, “Were it not for the yetzer hara, no one would build a house, marry, start a business.” (Genesis Rabbah 9:7)

As Jeffrey Spitzer reminds us, “The yetzer hara is not a demonic force that pushes a person to do evil, but rather a drive toward pleasure or property or security, which if left unlimited, can lead to evil.” In other words, what is often called “hara,” “evil,” is really more about its power than anything else.

And while power certainly needs to be checked, and can be extremely seductive and potentially corrupting, it is not inherently evil.

That words are powerful may seem obvious, but the fact is that most of us, most of the time, use them lightly. We choose our clothes more carefully than we choose our words, though what we about and to others can define them indelibly.

So gossip, is more complicated than being simply “evil.” What it truly has, though, is tremendous power. And so when we think about the words we use, perhaps it is best to be guided by these three questions: Is it true? Is it necessary? And most of all, is it kind?

Our words have power. The question is, what impact will they make? 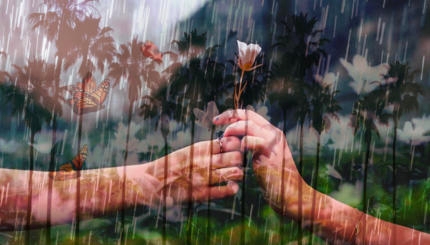 We humans come factory-equipped with latent godly qualities and the capacity to actualize them through our words and actions.