How Jewish Is Bernie Sanders?

Last night Bernie Sanders made history as the first Jew to win a primary in a presidential election, soundly defeating Hillary Clinton in the New Hampshire primary. The question, then, is what to do with this fact.

My colleague Heidi Hoover yesterday wrote about women supporting Hillary Clinton, noting how Madeline Albright and Gloria Steinem both in their way urged women to support Clinton, and yet both, however, were taken to task for their comments. This doesn’t negate, she writes, the consideration of gender in making this important voting decision.

But what then about Jewish support for Bernie Sanders? Policies aside, should we be supporting one of our own? Should there be similar calls for Jews to support the Jewish candidate?

Sanders is not running as a Jewish candidate, though his Jewishness is not a secret. Born in Brooklyn to Jewish parents and having lived his adult life in Vermont, Sanders has evoked his Jewishness at various times throughout the campaign: From his comedic turn on Saturday Night Live, when he spoke as a new immigrant hoping to change his last name so “it sounds less Jewish;” to his biography including the time as a young man he spent on an Israeli kibbutz, probably honing his socialist ideals; to a town hall meeting at George Mason University a few months ago when he was questioned about racism and Islamophobia by a Muslim student, to which he responded, “Let me be very personal here tonight. I’m Jewish, My father’s family died in concentration camps. I will do everything that I can to rid this country of the ugly stain of racism which has existed for far too many years.”

All of these “markers” may resonate with contemporary Jews: the ethnic humor, the youthful exploration, the Jewish historical experience as a call for social justice. The one aspect of Jewishness with which Sanders does not strongly identify, however, is the religious; he is not an observing Jew who finds resonance in Jewish liturgy or the Jewish holiday cycle.

But while not observant, Sanders does have a sense of the spiritual. Last year the told Rolling Stone magazine:

I’m not into organized religion. But I believe that what impacts you impacts me, that we are all united in one way or another. When children go hungry, I get impacted. When kids die because they can’t afford medicine, I get impacted. We are one world and one people. And that belief leads me to the conclusion that we just cannot turn our back on human suffering.

And, this, too, may resonate with contemporary Jews. This description of spirituality sounds very Jewish, for isn’t that what it says in the Torah time and time again: do not oppress a stranger, for you were strangers in the land of Egypt? In other words, because of the experience of slavery and liberation which we read in the book of Exodus, and we reenact around the Passover table every year, which we indeed evoke throughout our liturgy, we are to be concerned with the suffering of others.

Overall, though, the fact that Sanders’ Jewishness has not been a major factor in the campaign thus far is also telling. It says something about where we are as Jews in this cultural and historical moment in time: concerned with issues of Jewish continuity, mindful of the continued presence of anti-Semitism, and yet comfortable enough to have a Jewish candidate for President of the United States without it becoming a major issue. And so, because of this, we can perhaps say no, Jews don’t need to vote for Bernie Sanders simply because he is Jewish. Jews can find their resonances with Sanders’ personal narrative and spiritual expression, and cast their ballot for the candidate whose policies and positions are most agreeable. History has already been made.

It’s convention season as the major parties gather together to formally nominate their candidates for President of the United States. ... 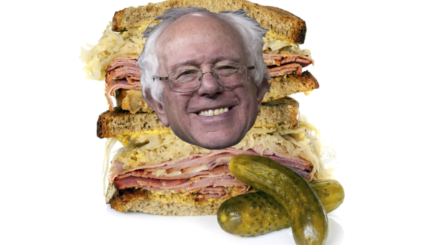 How Would You Make a Bernie Sandwich?

In case you missed it, MSNBC announced last night that Bernie Sandwiches won the New Hampshire primaries. This delightful stumble is ...

Well, folks, here we are. Just a few days out from arguably the most important election for the future of the ...