Ten of us walked to the creek, each one carrying her own trepidation, confusion, and curiosity. We represented different approaches to religion, a range of ethnicities, sexual orientations, and stages in our life journeys. Some of us had tears in our eyes, some sang slowly and softly. But we walked together as one, on our way to experience ritual immersion in a way I had never before encountered.

When my friend Dasi Fruchter offered a “Total Immersion Mikveh Lab” at the Wexner Graduate Fellowship Summer Institute, I was intrigued. Dasi works at ImmerseNYC, an organization  which provides a ritual mikveh experience for those who wish to mark celebrations, life transitions, healing, and more. I had never heard of “alternative immersion,” or immersing in a mikveh for reasons other than family purity, conversion, and preparation before Yom Kippur.

In our bathing suits, we stood at the edge of the water. Dasi asked each woman in turn to tell the group what she needed from them as she concentrated on her intentions and waded into the water. One woman asked us to sing slowly as she entered the creek. Another requested a fast and joyful tune. Many opted for silence, and were accompanied only by the rustling of the Vermont leaves.

As I watched each of the other women dip, my outlook shifted from an outsider’s curiosity to intense pride in this sacred space we had created. My mind began to open to the idea that Jewish women have an exquisite history with the mikveh, and that descending into water can be so much more than a necessary step before resuming marital relations. It can cradle a woman who feels that there is not enough space for her in the community. It can provide comfort to someone nearing the end of their life, and help them transition out of this world. It can join in the tears of those whose infertility makes them feel isolated. And it can whirl around a person celebrating their future and the path that brought them there.

I went last. Before I began, I turned to the group and noted that this past year has been one of pain and distrust in the experience and tradition of immersion. I asked them to cheer for me as I went in. I wanted them to join me in celebrating this group of women and the experience we had created together, which echoed millennia of women connecting with God and spirituality through water.

I slowly descended to the sound of clapping and hollers. I held my breath and submerged my head into the clear creek. In the silence which pressed in to me, I thought about what I was leaving behind — my ignorance of the mikveh as a place of healing, reflection, and celebration for people throughout their lives. I stood up, and the roar of my friends rushed back. I ducked back in, and held on to my second intention. I wanted to take with me from this moment the feeling of oneness with this group of diverse women. Once more into the warm air, and down one last time. In my last moments underwater, I promised myself that I would move forward with a mind open to the meaning that Jewish practice can have to each individual, and a heart open to the hidden lives of those around me.

Breaking through the water at last, I was joined by the others who had been waiting by the side of the water. We held hands, a group of Jewish women who had experienced something new and profound together, thanks to the leadership and sensitivity of Dasi, as well as each person’s commitment to support and listening. Together, we dunked under the water as one, a circle of women not preoccupied with the approval of others, including the curious cyclists passing us on the bridge nearby. As we came up for air, we began singing and dancing, the water and our joy both making us buoyant, with a little help, I like to think, from God. 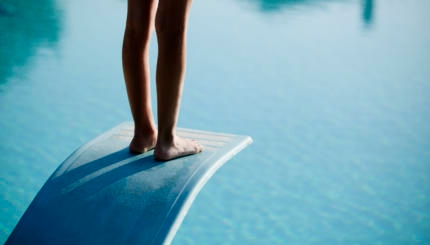