It’s Shavuot! It’s Memorial Day weekend! It’s my first week in a new city! In fact, it’s all three of these things for me.

The year has a natural flow – or perhaps more accurately, flows: the holidays, the seasons and their accompanying weather changes, our individual and collective “busy seasons.” There are New Years’ resolutions, there’s tax day, there’s our birthday, there are days on the calendar when we may feel particularly sad or happy because of what happened on that day in past years.

This weekend, a Jewish and secular holiday overlapped: Shavuot and Memorial Day. My guess is that Shavuot is not on the radar of most Jews. And my guess is that while Memorial Day is on the radar of most Americans, we tend to think of it as a long weekend, as a day off, as a time for barbecues and parades – rather than focusing on remembering those who died while serving in our country’s armed forces.

Often, holidays become disconnected from their origins, as they evolve over time. With holidays like Memorial Day, it would be unfortunate to no longer take the opportunity to remember what the day is really about.

In contrast, with other holidays like Shavuot, the emphasis of the holiday has shifted over time, and that’s not necessarily a bad thing. In the biblical text, Shavuot was one of three pilgrimage festivals. Later, when the emphasis became less on agrarian society, less on the ancient Temple in Jerusalem, and more on God and God’s role, Shavuot became celebrated as a holiday commemorating when God gave Moses the Torah on Mount Sinai. For people like me who don’t believe that God authored the biblical text, the holiday today is much more about celebrating the creativity of our ancestors and the texts which have made us Jews into a people.

Plenty of other Jewish holidays have evolved over time. Hanukkah was originally about a fractured community and military victory, and later became associated with a miracle of a cup of oil. Several Jewish holidays have their roots in pagan rituals, and then were reshaped into new Jewish rituals. All of these changes represent the creative evolution of our people.

Whatever it is, I hope you had a nice holiday(s) weekend.

Almost eight years ago, on the evening of April 22nd, after a full day of labor, my husband Rick and ... 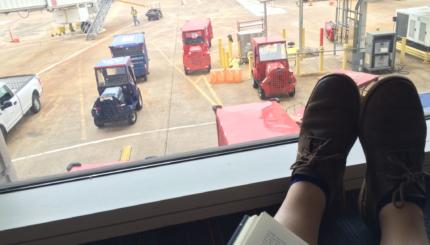 ...and what I learned from two days of delays

Sometimes the most challenging part of being a committed Reform Jew is seeking ways to incorporate Judaism into our home ...