I’ve come to talk with you again
Because a vision softly creeping
Left its seeds while I was sleeping,
And the vision that was planted
In my brain still remains
Within the sound of silence.

Stereotypes can be risky, but it’s probably safe to say that Jews aren’t best known for collective quietude. The ceaseless chatter of Jewish debate and dissent evokes a chorus of intellectual beauty and strength that has called history forward in countless wonderful ways. Against this backdrop of ceaseless sound, it’s all the more important – and challenging – that this week’s Torah portion (Shmini) beckons us into the sounds of silence.

Torah depicts a haunting scene. Aaron’s sons Nadav and Avihu offer God a “strange fire,” and God’s fire consumes them (Lev. 10:1-2). Aaron, High Priest of Israel and father of two sons struck down before his very eyes by the God he lives to serve, responds with utter silence: vayidom Aharon (Lev. 10:4).

Tradition hears Aaron’s silence as shock, dismay, grief, role conflict and much more. Tradition allegorizes Aaron’s silence to a prophet’s “silent sigh” (he’anek dom) transcending death (Ezek. 24:17). Tradition also uplifts Aaron’s silence as wise response to the incomprehensible: Aaron’s silence inspires Jewish tradition not to speak to a mourner observing shiva until he or she speaks first (Shulchan Aruch, Yoreh Deah 376:1). When words fail, it can be better to hold silence. And yet, Holocaust survivor and advocate Elie Wiesel railed against silence: “I swore never to be silent whenever and wherever beings endure suffering and humiliation. We must always take sides. Neutrality helps the oppressor, never the victim. Silence encourages the tormentor, never the tormented.” Wiesel might have challenged Aaron, “Why didn’t you rail at God?”

With such rich Jewish wisdom about silence, plainly there’s “a time for silence and a time for speech” in spiritual life (Eccl. 3:7). And yet, often we instinctively fill silence and stillness with whatever we can – speech, ring tones, music, muzak, packed schedules, perpetual motion – as if silence and stillness are so unbearable that we must avert them at all costs. Some fear the sounds of inner gears turning – maybe a booming silence from within. Others rail against any silence that covers misdeeds: such was Wiesel’s objection, and why to Shakespeare, “Silence most offends” (Much Ado About Nothing). To Dr. Martin Luther King Jr., “In the end, we will remember not the words of our enemies but the silence of our friends.” Political silence that conceals misdeeds is an enemy of ethics and right action.

True spiritual silence, however, reveals rather than conceals. To Mother Theresa, “We need to find God who cannot be found in noise and restlessness.” To Lau Tzu, “Silence is a source of great strength.” To Greek playwright Euripides, “Silence is true wisdom’s best reply.” To the prophet Elijah, God was in the “still small voice.” Our lived experience – from joy to grief and everything in between – provides chances to discern the quality of silence and the “voice” speaking to us from within it.

In a world constantly on the move, it’s all the more important that we reclaim sounds of silence and make them – all of them – truly our own. Only when we allow ourselves to discern the full and subtle palette of silence – sweet contentedness, submission, anticipation, awe, holiness, revelation, anger, fury, confusion, grief and more – can we fully receive these gifts in our lives in the deepest and most transformative ways. If you give yourself the gift of truly listening to the sounds of silence in your own life, what might you hear?

A revelation they'll beg for year after year. 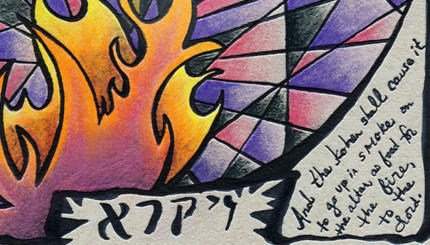 What Silence Conceals — and Reveals

How a tiny letter dramatically changes the meaning.