Transplants to California from the Midwest and East Coast, we found each other in the Bay Area. Melissa, a minister in a Protestant Christian tradition, was in her first year as a PhD student in ethics and social theory and Abi, an active participant at her queer Jewish synagogue, was in her first year of her doctoral studies in clinical psychology. Ours has been a journey of learning about each other’s traditions and celebrating what it means to be a multi-faith couple.

Entering into marriage was for us a political act, a religious endeavor, and an opportunity to invite our family and friends into our world.

From the time we decided we would mark our commitment to one another with a wedding, we knew that the ceremony needed to be the focus of the day. We set out to find leaders who would be willing to co-create a multi-faith, feminist, and queer ceremony with us.

Melissa was fortunate enough to be able to turn to a colleague from her seminary days who she knew shared her theology and commitment to radically open language for the divine in ritual. We knew he was still bound by the policies of the church but should the institution not catch up to our love in time that he would be willing to act independently as a theologically trained friend.

Finding someone from Abi’s Jewish tradition turned out to be much more challenging. Trusted leaders, while willing to perform similar-gendered Jewish ceremonies, were unable, because of tradition and/or conscience, to participate in our fully multi-faith ceremony. As a family seeking to be a part of both Jewish and Christian communities, this felt like rejection and was excruciatingly painful.

We finally found a Jewish leader in Colorado who was willing to work with us to craft a ceremony that honored both traditions and truly reflected who we were as individuals and as a couple. The four of us, the two brides, a Pastor and an Emerging Rabbi took to creating. By examining all of the parts of the traditional wedding ceremony in both traditions we were able to identify elements both in common and unique to each tradition. Anything that reflected aspects of marriage that we reject—property exchange, paternalism, misogyny—was cut. Elements were re-imagined to be more egalitarian and / or queered. We wanted to create a ceremony that was true to who we are and meaningful for those celebrating with us.

The whole wedding weekend, including the reception, was a blast. We wanted our guests to know that each piece of our wedding was intentionally orchestrated so we had our leaders explain what the rituals meant during the ceremony and how we had altered them and even provided coloring books for the children to learn about the ceremony in an age-appropriate way.

Entering into the legal relationship of marriage, as imperfect as it is, was a way to claim our civil rights and the protections it bestows upon us and a way to honor the work of all those who work for equality. Our ceremony was our way of claiming our right as members of our religious traditions to enter into public covenant blessed by and accountable to community and proclaiming that being queer and being religious are not antithetical. It was our way of publicly proclaiming that we are committed to being together as two individuals with strong roots, Jewish and Lutheran, Abi and Melissa.

We are grateful for the support of our family and friends, including Reverend Dan Roschke and Emerging Rabbi Dr. Caryn Aviv. 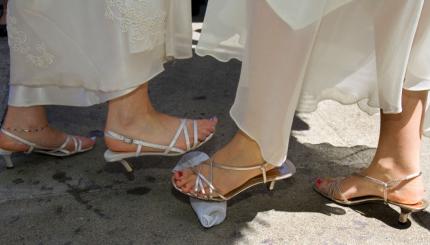 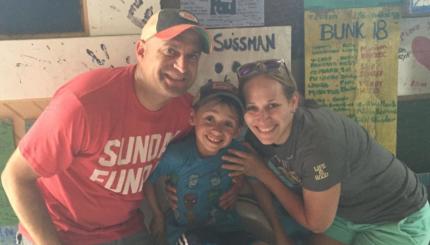