I’ve never actively sought out or consulted with a medium, or anyone who made claims to be able to communicate with those who have crossed over. But on this week, following up from my colleague Tsafi Lev’s piece yesterday on the possibility of spirits of the dead communicating with us, I’d like to share the story of what happened to me the first year I led a Rosh Hashanah service.

Now, I should preface this story with the knowledge that, traditionally, Judaism has been quite clear that we should not consult with mediums—there is a biblical prohibition (Leviticus 19:31). At the same time, we have the dramatic story of King Saul (I Samuel, 28), who had himself banned such people from his Kingdom, consulting in secret with the Witch of Endor, to get one last piece of advice from the prophet Samuel, at that time deceased.  What I find fascinating about both the biblical prohibition and the story in Kings is that, while we may not seek guidance in this way, our tradition clearly recognizes that such a thing is possible and that people who have the ability to communicate with the other side exist. Whatever you believe to be true, there’s certainly a rich history and folklore in our tradition on this subject.

So, back to my story. I was a student rabbi who had just started my first year of rabbinical school. I was contributing to the High Holy Days at a synagogue in northern England. On the second day I had been asked to provide a less formal, creative service that would appeal to families with children, and so I was on the bima taking the lead for that particular morning. About 20 minutes before the end of the service, I noticed a middle-aged blond woman in business attire enter the sanctuary and take a seat. I thought it a little strange to arrive so late in the proceedings, but being a visitor to the community I had no idea if she was known to others or not.

When the service came to an end, a number of people came up to me but most of the congregation quickly moved toward another room for the Kiddush. The blond-haired woman approached me and the first things she said was “I have a message for you.” Her eyes fluttered and the tone of her voice changed, and she proceeded to share a message that had less to do with who might be doing the communicating, and more to do with where I was in that moment in my life and the decisions that I knew lay before me. They were framed in such a way that, as I listened, I was drawn in and fascinated by what was unfolding before me, while also maintaining a healthy skepticism that this might be a con and it was easy enough to make my own connections between the words she shared and the situation that I was applying them to. I wasn’t quite sure what to make of this, but as I was trying to decide, she snapped out of the altered state.

Speaking quite normally, she explained that she was driving by the synagogue on her way back from a business meeting. She didn’t know this was a synagogue, but she received a strong message to enter the building. So she pulled up, sat down, and knew she had to wait until the end of the service to speak with me. She told me she didn’t control when these messages came and that she had learned just to be the messenger and those that she delivered messages to would figure out what they meant to them.  I asked for her business card (which did not list her as a Medium), thanked her, and she promptly left. I went to join the rabbi and the congregation at the Kiddush, and didn’t say a word of any of this to any of them. It felt very surreal.

I’m still not certain what I experienced that Rosh Hashanah of 2001. I wrote and thanked the woman, but never had any further interaction or communication with her. The words she shared with me that day were words that I heard to be of direct relevance to the fork in the road where I felt that I was standing at that moment in my life. I don’t know if I would say that she helped me choose which fork in the road to take, but when I made my choice, her words echoed in my mind, providing reassurance that I had made the right one. A Medium or a Messenger? In Hebrew, the latter is a malach—which we more typically translate as “Angel.”

I’m no more certain today than I was then of what is true or what is real. But whenever anyone approaches me with,

“Rabbi, I have a story, but I’m not sure if you’ll believe me…” I’m ready to listen.

Spiritual Not Religious at Rosh Hashanah

Shabbat dinner with young university students can be an adventure. My husband and I warm them up with a few ...

Ghosts, Spirits, and Jewish wanderings in the Afterlife

My colleagues Joshua Ratner and Alana Suskin have offered their perspectives on kids trick or treating, and generally engaging (or ... 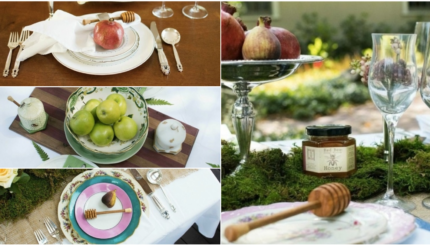 Some of us are blessed with the “D” (designer) gene and well, some of us can cook. Let’s just say ...