When we received our JOFA sukkah poster last week, I excitedly showed my daughters, ages five and ten, the poster of women leaders. They looked it over and the following conversation ensued:

Child: “Do you think Uncle ____ and Aunt ___ would want to hang it in their sukkah?” (We are city dwellers who don’t have our own sukkah.)

Child, a bit sheepishly: “Well, Mommy, I don’t want to be mean, but the women are a little ugly, don’t you think? Couldn’t they have made them prettier?”

Me: “I don’t think the point was whether they were pretty or not.”

Child: “I am not saying Nechama Leibowitz looked like a rock star in real life, but I’m sure she was prettier as a young woman.”

Me: “Do you think that we’d be having the same conversation about the Baba Sali or Rav Moshe Feinstein? Are they especially handsome?”

Child: [Rolls eyes] “I knew you were going to say that, but I still think they could be prettier.”

And so I thought about it—should the artists have attempted to “airbrush” Nechama Leibowitz?

Why do pictures of older male rabbis look distinguished to most viewers, but pictures of an older Nechama Leibowitz remind us of an elderly grandmother?

This summer the New York Times ran an article about camps that ban “body talk”—among them the Jewish farm camp Eden Village. The article noted that at Eden Village “on Friday afternoon, when the campers, girls and boys from 8 to 17, are dressed in white and especially polished for the Sabbath, they refrain from complimenting one another’s appearances. Rather, they say, ‘Your soul shines’ or ‘I feel so happy to be around you’ or ‘Your smile lights up the world,’ … Signs posted on the mirrors in the bathroom read, ‘Don’t check your appearance, check your soul.’”

While I could see the virtues of checking your soul, rather than your appearance, if I am to be honest with myself, I can’t actually imagine parenting (or living) this way. I do tell my kids they look beautiful, and when they remember to brush their hair, I comment on it. I like hearing compliments on my appearance and I want my daughters to hear those compliments too and compliment others, while not being overly focused on their appearance. This, of course, is a very tough balancing act, made all the more difficult if one has a child who loves fashion and notices everyone’s clothes (as is the case for my five year old).

One of the great virtues of JOFA commissioning this project is that it allows all of us to see women scholars represented on the walls of our sukkot and schools. While there’s certainly some part of me that wishes that my girls didn’t ask “why aren’t they prettier,” I am glad that this sparked the question for them. There is no doubt that children raised as part of a society that thrives on airbrushing will expect conventional beauty from women leaders and scholars, but I hope that we as parents and educators can begin conversations with them that will begin to chip away at some of these notions.

Sleeping under a bed. 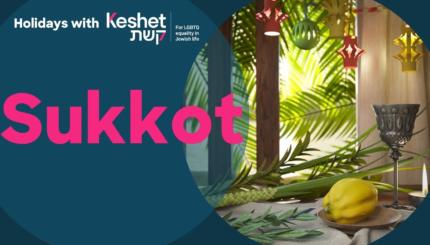 Sleeping in the Sukkah

I’ve never slept in a sukkah.Growing up in New England, it was always too rainy, too cold, too windy, and ...