The Rabbi, The Pastor and the Torah of Mankind

Though the Ethiopian sun beat down on our necks as we layed mortar and brick for the school’s foundation in Gondar, Ethiopia, no suntan lotion could prevent the mark our ancient discovery would bring us as we made our way through buried past of our Jewish family, the Jews of Ethiopia…

Last winter I had the distinct pleasure of joining the American Jewish Joint Distribution Committee (JDC) cohort of twenty-five young professionals on a journey to Ethiopia. Charged with passion for social justice, and a commitment to peoples in need, each of us brought a unique perspective on Judaism, Ethiopians and the world of poverty. Each of us came with stories; each longed to heal the fractured world, but none shared the perspective of being an Orthodox Jewish rabbinical student who is empowered by his dual heritage of both African and European descent; who proudly identifies as a Jew of Color. None, that is, except me.

I was captured in a state of knowing that a part of my family once originated just west of Ethiopia, I was entangled in a state of feeling that I was among the few who were lucky enough to explore the story of the African Jews of yesteryear, and I was saddened by the living conditions of the “Third World,” and wondered how it got this way.

After an entire day of supplying medication to dozens of shifts of schoolchildren who get repeatedly sick because of the disease infested water, our JDC cohort began a new and uncharted journey through the tall grass on the outskirts of the Gondar village. Soon we saw a large enclosed area in the middle of the field. We hopped in. Dan, a member of the JDC year-long fellowship was the first one in, I was the second. “I’m pretty sure this is the Jewish cemetery,” he murmured as we took our first steps. Dumbstruck, I stammered “wh-where?…” He turned around to look at me, and then at the ground, then back at me and said sharply “right. here.” I felt lost for a moment, and then notice a rectangular formation of rocks and realized we were walking over graves.

After coming to my senses, I called for the group to go around the enclosed field and meet us at the other side. Dan, myself, and the few others plowed through until we were at the peripheral area. As we reached the end of the field, there were four tombstones standing strong with Amharic chalked onto the stone. Maybe they were wealthy Jews? A rabbinic family? Recent deaths (within the last 200 years)? we had no idea. Like Jacob in the Torah (Genesis 28:17), we did not know the greatness of this place… it struck me.

Standing around these graves we looked to one another. I realized no matter how far the cultural and religious ties from the reality of most of our current communities, as a future rabbi, as the only clergy on the trip, I knew words must be shared, and the silence had to be broken.

“One of the most vicious ways to go to war against a people is through destroying their culture and way of life. Many cultures would bury total cities to erase their opponents from history, and yet, the very fact that there is knowledge that there is a Jewish cemetery shows the intense commitment of our ancestors before us. Despite religious practice, wealth or pressures from the outside world, these Jews in their hundreds, stuck together. Child after child, parent after parent joined in life and as we see, in death with their Jewish roots.

“In a world of so much fragmentation, we must not mistake that brokenness will not find itself in the strongest of families. As we the Jewish people engage in the struggle unify our communities, let this experience remind us that if our ancestors died together, through all the troubles of exile, then we, the living, must live together despite all that challenges to do otherwise.”

We recited King David’s Pslams 23 “The Lord is my Shepherd I shall lack nothing…” and we began our walk back to the center where our Jeeps and JDC personnel took us back to civilization. As the cohort was in the distance, I walked slowly and I took one last glance at the graves of my people, and said “thank you, thank you, thank you.”

So the sun may wane, and the mark may fade, but the blessing in the Amidah to “gather the exiles from the four corners of the earth,” will forever include not just those close to my community, but also our Jewish brothers and sisters in Ethiopia, thousands of years old. 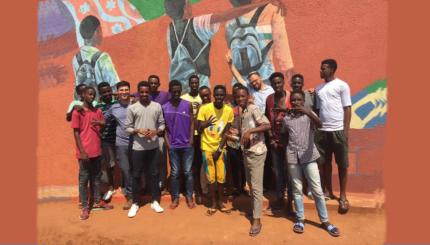 Lessons learned in Rwanda in 2017 are inspiring a rabbi's work in the United States.

Be’chol Lashon mourns the passing of Rabbi Hailu Paris, a native of Ethiopia who lived most of his life in ...

A Remarkable Journey from Ethiopia to Israel to Petaluma, CA

Israeli Maor Sanbata came to the United States this past summer to be a counselor at Camp Be’chol Lashon. Born ...