Am I Really This Typical?

Check out today’s powerful post on The Canteen from Sheira Director-Nowack, who reflects on how a Keshet training on LGBT inclusion opened her eyes. Our next training for Jewish leaders is February 2nd in the Bay Area.

I am not quite sure when I first started to understand the notion of homosexuality. When Billie Jean King was forced to come out, I distinctly recall asking my parents about it and them telling me that she was “with another woman” and that woman was telling her secrets to the world. I remember having this strong reaction about how unfair it was for someone to tell another’s secrets. As I grew older, most of what I learned about LGBT issues was tied to the AIDS crisis of the 80s. And then, as time passed, it became less of a “thing” I knew about and more of a reality in my life. There was a cousin, who was gay, and died from AIDS. A friend from high school who came out and we all accepted. A close girlfriend from Jewish sleepaway camp who came to me struggling with coming out and wanted my acceptance. In the course of 25 years, there has been a transformation from when being gay was this abstract thing in my life to being just a way of life. I am pretty sure that the planet around me has grown with me in this area too. I mean: same-sex marriage 25 years ago? People would never have even understood why it was a civil rights situation.

I am a pretty liberal person, probably more liberal than most. So it is not a real shock that much of this is totally a “non-issue” for me. However, I am always shocked by how much I have to learn and how completely encompassed I am in my own little world. When that friend from sleepaway camp came out to me when I was 22, I was surprised. She wanted my approval so badly and I was not sure why. And I didn’t know how to explain that my surprise was just surprise, not disappointment or judgment. It took us a few weeks and then everything was back to normal between us. Today I am still friends with her as well as and her partner who she has been living very happily with for over ten years.

When I got my Masters in Social Work and Jewish Communal Service, there were plenty of LGBT people there and also plenty of people who thought this was wrong. I was shocked by the ignorance of those who thought this was a moral decision. I considered myself an advocate of anyone who needed me to speak up. That being said, I was still pretty separate from the LGBT world. 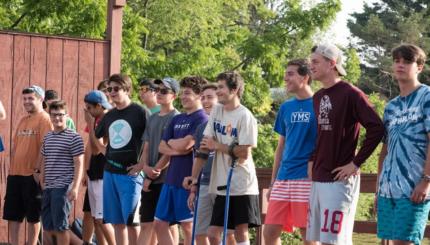 Seeing the Me that I See

February is Jewish Disabilities Awareness and Inclusion Month. Join us as we share stories that highlight the impact of inclusion in ...

Lucky to Have Two Mommies

Earlier this month an article entitled Dear Gay Community: Your Kids Are Hurting hit the web and was widely circulated. The author compared ...

Out at Shul… and No Big Deal

A series by Jewish moms and dads with LGBTQ children. When a child comes out, a coming out process begins ...