A few weeks ago I was asked to give a keynote address at a middle school. My ever-proud Jewish mother insists on attending. As I’m waiting to be called to the stage, the principal and I start talking. He finds out my mom is in the audience. She’s been a teacher in his district for over forty years. He asks if he can go on a tangent before he introduces me. His eyes light up when he says the word tangent.

During his introduction he asks my mom to stand up and then he announces that she’s a Holocaust survivor. People applaud. This is the worst thing ever. It’s like pinning a bull’s-eye to my mom’s forehead. (If you don’t know, she’s the one in my book who reminds us each Hanukkah just as she wraps our menorah in an old rag and hides it in a mop bucket underneath the sink, “Don’t tell anyone your Jewish. They will find you. They will kill you. You will die.”) In some way, I know this is my fault. I’ve breached not only our family contract, but something more – I’ve put her survival at risk.

From backstage, I imagine my mom hunching over and figuring out how to make an exit. Finally, she stands up and runs out of the school.

When I call her afterward she says she’s sorry she couldn’t stay.

“The problem with being Jewish is they make you do stuff,” she says. I’ve heard this before. She’s quoting her favorite Jewish author, Eliezer Sobel. Whenever she wants to prove a point she turns to a certain page in his book “Minyan: Ten Jewish Men in a World That is Heartbroken.”
To make matters worse, Sobel is my friend, so whenever she quotes him it’s like she’s spooning on the Jewish mother guilt. “Eliezer says there are prayers for everything – upon rising, upon going to the toilet, upon eating fruit, upon smelling a new smell, upon seeing a deformed person, for baking challah, for building a sukkah.”

I mostly tune her out and this gets me thinking about the 614th commandment that was added to our already long list of commandments that reads, “Jews are forbidden to hand Hitler posthumous victories……They are commanded to remember the victims of Auschwitz, lest their memory perish……They are forbidden escape into either cynicism … and a religious Jew who has stayed with his God may be forced into new, possibly revolutionary relationships with Him.”

My mom says she doesn’t care about doing stuff anymore. She says she’s leaving that up to me and my nephew, Cody. She calls us The Walking Jewish Exhibitionists.

She refers to me in this way because of my first solo show, Slash Coleman has Big Matzo Balls, which debuted in 2007. In it, I attempt to come to terms with my mom’s surplus of perplexing social behaviors. During the show, I give birth to a matzo ball, have sex with a Jewish Fairy Godmother, do a stand-up routine dressed as Jesus, and talk to a sock puppet named the Super Cock.

The show manages to offend just about everyone. Many Jews said I didn’t have a right to tell the story because it didn’t belong to me. Christians threatened me. The reviewers hated it. Members of my synagogue dismissed my work saying, “He’s one of those (meaning a 2G). Let him do what he wants.” And, my mom hid in her room. She had spent a lifetime hiding her connection to anything Jewish and I was outing our family in the most public of ways.

When I hang up the phone, I call my nephew, Cody. He tells me he’s gotten another tattoo. This one, on his wrist, a Hebrew inscription – one of the most famous translations from the Torah. Moses asks God for his name and God answers “Eh-yeh Asher Eh-yeh” It means “I am that I am” or “I am what I am.”

I think that things have come full circle now.

When my mom finds out about the tattoo she calls and jokes that she needs a cootie shot. I think about holding her hand and drawing a circle and a dot on the back of it and repeating the phrase, “Circle. Circle. Dot. Dot. Now, I’ve got my cootie shot.”

“The problem with being Jewish,” I say to her, “is they make you do stuff.”

There is, as expected, only silence on the end of the line. 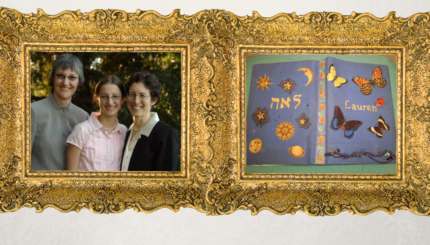 Growing up with Two Moms: When Ima Isn’t Jewish

My mother always told us she could do magic. And though my sisters and I were modern children of the ...

My Jewish Mother the Hero

My family has always been the foundation of my life. I have very strong bonds with both my parents. Over ...