The connection between the Passover story and LGBTQ liberation is easy. Too easy. A group of people suffer under oppressors for hundreds of years and, thanks to a charismatic leader and a little perseverance, they are delivered amid clap and thunder, free at last to live their own lives. And indeed the Passover story has served as a prototype for liberation narratives for ages, not just in an LGBTQ context. It’s a story of underdog triumph that we Americans love. Our culture has embraced this Biblical tale with an almost unprecedented tenacity, and Americans who haven’t the slightest clue what the “books of Moses” are can at least summarize the book of Exodus for you.  And can anyone read the line, “Let my people go!” without hearing Paul Robeson’s rumbling baritone?

But we’ve got the story all wrong. I’ve been saying this for years, poo-pooing people’s feel-good glow of freedom during this season, but no one wants to listen to a curmudgeon during Pesach.

I realize I’m being a buzz kill, but the Passover story is not about liberation at all. We conveniently truncate the line, “Let my people go.” That’s not even the end of the sentence. Every single time the line appears in Torah, it is followed with the words, “That they may serve me.” God was not interested in the Israelites’ unfettered freedom. The story is not about liberation. The story is about servitude. God freed the Israelites for the explicit and solitary purpose of allowing them to serve a different master.

As the liberation-loving people that we are, we have co-opted the famous phrase. Once I realized how prominent the second half of that line factored into the story, I got a funny feeling, like the first time I learned that our American ancestors on the Mayflower did not weather the Atlantic Ocean in search of separation of church and state. That’s another story we’ve stripped of its complexity, rendering it virtually unrecognizable from its historical truth.

So what are we to learn from the Exodus, we queer people who fancy ourselves modern Israelites suffering under a stuffy heteronormativity, strangers in a strange land?

For one thing, I think the phrase, “That they may serve me” is helpful to keep in mind. Obviously I am not suggesting that queerfolk become religious. But we can be mindful that we, like the Israelites, are not truly seeking unfettered freedom. When the Israelites were freed in order to serve God, we were freed to serve the greater master, the greater ideal. We were no longer enslaved to a life of serving the lesser thing. This is truly the goal of LGBTQ liberation — not that we may live without rules, but that we may live under a rule greater than the rules of patriarchal establishments, homophobic laws, gender binaries, and safety concerns.

Another relevant aspect of this story is what happens after the climactic splitting of the sea. Once free, the Israelites immediately begin bickering: “We’re thirsty. I’m tired of manna. Where did Moses go? Oh, look — something shiny!” For the ancient Israelites and for modern people, the gain of privilege comes with a price: loss of perspective. Once free the Israelites lose their sense of unity, their willingness to work together for a greater ideal. Scenes follow in which tribes brandish swords against fellow tribes. The dramatic exit from Egypt becomes a footnote in a larger narrative of bloodshed. The freed wanderers wring their hands and wonder, “Is this truly better than dying in Egypt?” Around this time every year, rabbis across the world will denounce the Israelites for their ingratitude, but I think it’s a valid question.

That one of humanity’s earliest liberation tales so pointedly illustrates the cyclical nature of liberation and oppression is a sad statement on human nature. Long before queer politics drove home the point, the book of Exodus taught us that privilege is easy to become blind to when you are the one holding it. It’s no coincidence that straight white able-bodied cismen are the least likely to use the word “privilege.” They are the least likely to know they have it.

Sadly, LGBTQ communities are at times blind to the privileges that we hold, and too willing to wield them in a way that harms others, despite our own status as second-class citizens. We are too often a movement that favors the white, cisgendered, middle class. Our most visible advocates portray our cause using traditional family structures — monogamy, marriage, and kids — while leaving behind people whose ideas of love and family make us uncomfortable or push our limits.  This is not a queer ideal. And it’s not a Jewish ideal either.

Moses’ negotiations with Pharaoh can be instructive to queer politics. For several chapters Moses and Pharaoh negotiate the terms of the Israelites’ release. Pharaoh tries just letting the men go, then just the adults, then all of the people but not the animals. Did Moses rewrite the bill, deleting any reference to the bathroom needs of hoofed animals, and then get his proposal passed? No. In a stirring image of inclusivity, Moses tells him, “Not a hoof shall remain behind.”

Pesach is a holiday of liberation, yes, but it is based on a story with a greater vision. It is a story that reminds us to ask ourselves if the values that we are serving are truly the greatest values possible. The story of Exodus provides a yearly reminder to search ourselves for privileges invisible to our own eyes, so that we may see our power over others before we turn liberation into a footnote in a never-ending story of oppression. And Pesach is a yearly reminder that we do not negotiate at the expense of others, that liberation is not a zero sum game, that civil rights do not exist in fixed quantities to be doled out sparingly, and that, in our journeys toward freedom, we are not allowed to leave a single hoof behind. 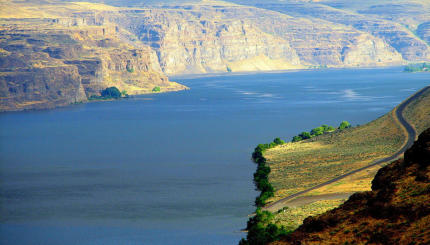 With a river one is able to see the other side, and so the potential for crossing over to a new life is attainable.