A few days ago, I stumbled across a terrific quote, which I eventually tracked down to a
New York Times
article in which Rabbi Marc Gellman asserts, “‘I’m saying that techniques can make a difference,’ Gellman said. ‘Like wrapping yourself in a prayer shawl if you want to shut out the world. But really, when you come right down to it, there are only four basic prayers. Gimme! Thanks! Oops! and Wow! … Wow! are prayers of praise and wonder at the creation. Oops! is asking for forgiveness. Gimme! is a request or a petition. Thanks! is expressing gratitude.” The quote reminded me (and perhaps was inspired by, who knows?) of the Christian writer Anne Lamott, who is among my favorite writers. Last year she came out with a new book called,
Help, Thanks, Wow: The Three Essential Prayers
, in which she asserts the same idea.

I happened to be struck by this quote, perhaps it was one of those moments when things come together – maybe Lamott would call it a miracle- because I had that morning had a peculiar conversation with my partner in which I was feeling a little sorry for myself (Not Attractive, I know). We had been talking about the need for people to share personal things in their lives with their friends, in particular, struggles and problems, and when he asked me who besides himself that would be (on the idea that one’s spouse should not be one’s only support -especially since they’re sometimes the problem that requires unloading) I had to admit that I had no idea who that would be.

It’s funny, but I’ve always felt terribly awkward about burdening other people with my problems. Perhaps I would have made an excellent Englishwoman, since I’m quite good at keeping the “stiff upper lip” and “carrying on” most of the time. But I just feel as though it would be wrong for me to bother people with my petty little bullshit. Is it arrogance? I have no dislike of people coming to me with their problems. To the contrary, like most people, I regard a confidence as a positive thing – part of relationship-building. So maybe it is arrogance – as if somehow I’m different and can get along without.

But I don’t think that I am the only person struggling with this. Indeed, I think it’s why so many people have trouble with prayer – and even with religion (as opposed to a nebulous and unstructured “spirituality,” which demands little of us in terms of self-revelation or discipline). Prayer is indeed “help, thanks, wow,” and there is nothing more difficult than to ask for help.

In an interview with NPR about her book, Lamott says, “Well, I’ve heard people say that God is the gift of desperation, and there’s a lot to be said for having really reached a bottom where you’ve run out of anymore good ideas, or plans for everybody else’s behavior; or how to save and fix and rescue; or just get out of a huge mess, possibly of your own creation.

“And when you’re done, you may take a long, quavering breath and say, ‘Help.’ People say ‘help’ without actually believing anything hears that. But it is the great prayer, and it is the hardest prayer, because you have to admit defeat — you have to surrender, which is the hardest thing any of us do, ever.”

There are two levels to not asking for help: there is fear of rejection. What if someone did feel burdened by one’s TMI. On the human level, of course, this is obvious. Who doesn’t occasionally fear being rejected? And being told that you are making yourself too intimate in passing along the more than usual information is pretty scary. Being told that the other person does not want your intimacy.

But people can fear rejection on the divine level as well. The talmudic story of Elisha Ben Abuya, also known as “Acher,” – “the Other,” – is a classic example of this. Although there are several tales of how he became alienated from the community of the sages, it is what happens after that is full of pathos. It is, indeed, terrible. In several places, Elisha is described as being excluded from the possibility of repentance. His student, Meir, begs him to return (to repent and be re-accepted by God for –whatever it was he did), but Elisha tells him that he has heard a heavenly voice which told him, “All may return – except Acher”

And yet this idea is one in every other place foreign to Judaism. No one is truly ever eternally excluded from the possibility of returning to God. Repentance might be very difficult, it might even require one’s death to complete atonement, but it is not impossible. Perhaps what was really so pathetic here is that one can, reading carefully, interpret the passages as meaning either that Elisha wasn’t forbidden to return, but Acher was – in other words, he had to abandon his identity as someone different from everyone else, and allow his community to help him mend, or perhaps even that the only thing standing in his way was himself – that that voice that he thought of as God’s voice was only in his own head, and God would have accepted him back at any time.

Shall We Pray? Spontaneously?

Occasionally, a book about Jewish prayer will tell you that Judaism discourages spontaneous prayer. That magic of Jewish prayer, the ... 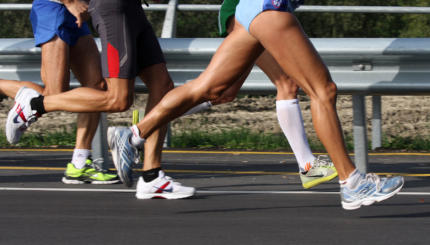 For me, running is something spiritual

Hand me my tiara, please

As a rabbi and an activist, I often get called upon to speak at interfaith events of various sorts.  Over ...