Creating inclusive Jewish spaces is a great goal — but how do you do it? While the answer is likely different for every synagogue, school, and youth group, it’s helpful and encouraging to hear about others’ successes, triumphs, and their lessons learned. So we’re running this regular column, called “The Tachlis of Inclusion,” to spotlight practices and policies that have worked for Jewish institutions all over the country. We hope they inspire you. Drop us a note if you have a story to tell and you may end up as next month’s feature! You can read the inaugural post in this series, on the Israel Center for Conservative Judaism, here.


Here, Elise Richman of Beth El Synagogue Center in New Rochelle, New York, shares what happened when they invited writer gay Jewish author Wayne Hoffman to speak at the synagogue for one of their first LGBT events. Special thanks to Rika Levin for sharing this with us. (Westchester County, where New Rochelle is located, is the 7th largest Jewish population in the country and one of the the fastest growing Jewish populations!)

On a recent Sunday, we all woke up a little more tired than usual. After all, we had to

change our clocks and lost an hour of our precious time. Time means different things to different people, but this Sunday the large group of people gathered at Beth El Synagogue Center learned even more about the value of time as we “spring forward.” I refer not to the changing of the clocks, but to an effort to change perceptions, as Beth El strives to communicate a message of inclusiveness to its diverse Jewish community. More than 70 individuals, including over a dozen teens, gathered to

integrating these dual identities in his own life and work.

Beth El’s Keruv (inclusion) committee, dedicated to “drawing close” those who might otherwise feel marginalized or alienated, invited Mr. Hoffman to speak after reading his blog in the Huffington Post and then his new novel,
Sweet like Sugar
. The novel is about a gay young man who came of age in a suburban Conservative synagogue, not unlike Beth El, and was unwittingly made to feel unwanted, and who now was struggling to reconcile the role Judaism should play in his life. Wayne explains,

“Like many gay Jews, I’ve wrestled for many years to reconcile my dual identity. The path I’ve traveled isn’t identical to anyone else’s path
—
and I’ve found different ways to balance my identities at different points in my life
—
but I’ve reached a point where I feel comfortable in both communities, and feel like my identity makes sense to me in an authentic way. I hope that by sharing my personal story with a certain frankness, I can help other people share theirs, as well, and spur a larger discussion.”

Following welcoming remarks by Rabbi Sirner, the writer spoke of recognizing his sexual orientation before he was bar mitzvah age, and embracing it as his defining identity while in college, to the exclusion of Judaism. He credits his observant Jewish parents and family with being wonderfully supportive, especially given the times. Only years later did he learn of the alienation his parents themselves experienced at their Conservative congregation.

Discussing time and how it shapes individuals and institutions, Wayne reminded the audience of the great strides the Conservative Movement has made in the last 25 years, He pointed out that the rate of change was “lighting-fast” in the 5772-year scope of Jewish history. Nonetheless, that represents an eternity in the personal history of an individual.

Noting the teens in the audience, Wayne commented on how much it would have helped him to attend such an event as this at his synagogue when he was young. Instead he was subjected to impersonal but vivid condemnations by his own rabbi’s sermons, and heard the deafening silence of Hebrew school teachers when boys taunted someone as a “faggot.” Given that this was the experience of so many gay and lesbian members of the Jewish community, Wayne suggested in answer to a specific question, that Conservative synagogues, like Beth El Synagogue Center, might think about ways to explicitly communicate to the larger public that they are welcoming. Rabbi Sirner sees this as an important topic and is proud of the fact that his synagogue is stepping up to the plate and is willing to take up this conversation with an open mind and open heart. He went on to say:

“Now that the movement has decided to, at last, open its doors wider to gay people, Conservative synagogues and organizations need to start to implement this openness in tangible, explicit ways. We have to remember that this issue is not only about the gay members of all ages within our community, but also their parents, siblings, aunts, uncles, work colleagues and of course their children and grandchildren
–
they are all part of our family and they are all to be welcomed here.”

The Tachlis of Inclusion: Temple Beth Sholom in Miami 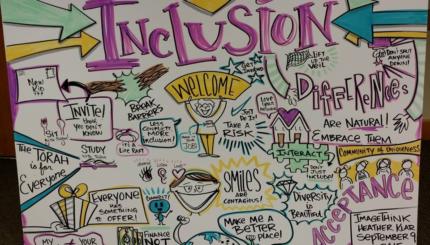 In the course of our work to create and nurture welcoming, inclusive, Jewish communities, we have the privilege of working ...