Last week we celebrated the holiday of Purim in which we recall the survival of the Jewish people against the attempted genocide by Haman, the chief adviser to King Ahasuerus of Persia. Every year we rejoice on the holiday of Purim just a few short weeks prior to entering the season of Passover and I believe that this is not at all a coincidence.

The story of Purim is the story of a Jewish community that had forgotten who it was. It is the story of a highly acculturated and integrated community into the larger Persian society. A Jewish woman named Hadassah changes her name to the Persian Esther and marries the King and no one even comments on this intermarriage in the account offered in the Book of Esther. [However, there is much rabbinic conversation on this subject offered in the Talmud.]

It is within this backdrop that Esther’s uncle Mordechai resists the wholesale neglect of the particular in favor of the universal and takes a stand, which is decidedly not a bow, against the phenomenon. He is singled out by Haman in particular for punishment and the entire Jewish people broadly. In a society marked by expected cultural conformity, one cannot have any sub-group demonstrating their uniqueness, living a counter-cultural life, so the decree issued by the government under Haman is nothing less than total annihilation.

To save the Jewish people Mordechai guides Esther to see who she really is and to be true to herself and to her husband, the King. In so doing she raises her mask from upon her face and embraces her destiny. Esther becomes a symbol for all the Jews in the empire to also raise their respective masks, the societally and the self-imposed barriers to full Jewish expression, and through their collective action and their renewed pride, overcome the challenge set before them and survive.

The message of Purim is an essential one for the work of self-reflection that the time of Passover calls us to. Passover, as the foundational narrative of the Jewish people, is not only about our physical liberation from Egypt. It is not only about our miraculous rescue from the grip of oppression and the entering into the daylight of freedom from the nighttime of torment. Passover is about defining us as a people. It is about preparing us to be ready to stand at Mount Sinai only a short while later and receive the Book that would transform human civilization for all time.

To be able to experience a Passover in our lives and to be able to relive the account of the Exodus as our tradition commands of us (Mishnah, Pesachim 10:5) we need to be able to lift the masks from our faces that work to hide us and to conceal us from ourselves and from others. The transition from Purim to Passover is about being ready to be capable of redemption. The first step in that redemptive process is reclaiming who we are – not who we act as or who we present ourselves as, but who we are at the deepest levels of our selves.

Purim is about concealment. More specifically, it is about movement from the covert to the overt. There is a sustained ... 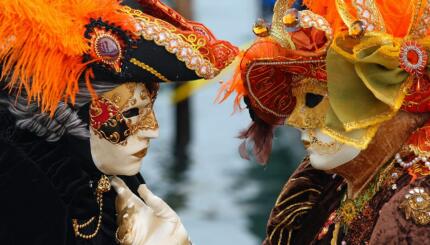 Sometimes it is by dressing as someone else that we reveal our truest selves.

In this alliterative Mensch Madness match up, Mordechai and Moses are about to meet!This match is tough, because both of ...