If you ever watch infomercials, you know that what they really sell isn’t just an amazing product — it’s the fact that you get to see how the product works. And in his article “The Pitchman,” Malcolm Gladwell introduces us to Ron Popeil, the maker of some of the most effective infomercials ever. What Popeil discovered was that infomercials really sell transparency — a sense of confidence and knowledge in our ability that leads us to say, “I can do this!”

Think about a VCR. Is there anything more frustrating than seeing that blinking “12:00”? What frustrates us isn’t the VCR itself — it’s that it feels totally and utterly impossible to penetrate. And as Gladwell says, if Popeil had been the person who had invented the VCR, and presented it like his other products, the tape wouldn’t be inserted behind a hidden door — it would be out in plain sight, so that if it was recording, you could see the spools turn. The controls wouldn’t be discreet buttons; they would make a reassuring click as they were pushed up and down, and each step of the taping process would be identified with a big, obvious numeral so that you could set it and forget it. (Gladwell, What the Dog Saw, 24)

What Popeil realized was that we want to know more than just the “what”– we’re also very focused on the “how”. We like feeling that we’ve learned some arcane knowledge (“oh, so THAT’S how that works!”), and since knowledge is often power, if we get to see how something works, we feel more equal to those who already had the knowledge — everyone now knows how this product works; not just the creators.

Are There Times We Shouldn’t Be Transparent?

There’s a Jewish source that explores these questions — Numbers, Chapter 18. When the Israelites were wandering through the desert, they always carried with them the “Tent of Meeting,” the place where God dwelt. For most of their wanderings, any Israelite could go into the Tent at any time. But in Numbers 18, God creates a “hierarchy of holiness,” preventing everyone except the priests and Levites from entering the Tent, and putting the vast majority of the Israelites out of the loop if they wanted to see what the priests and Levites were doing:

This is a huge question for us today. We love sharing what we’re doing through Twitter and Facebook, but if we share too much, we become vulnerable to problems like identity theft. We are constantly in a struggle between sharing knowledge and protecting it.

When Do We Open Up Our Knowledge Base?

Ron Popeil realized that selling transparency was more profitable than selling products. At some point, we have to decide when our secret knowledge needs to become open to all.

During the time the First Temple stood, only the priests themselves — a very small group — had access to the knowledge about how they should perform their duties. They kept their knowledge private. But a few centuries later, the specific details of the priestly duties were written down and later became the book of Leviticus — a text any of us can study today, allowing anyone at all to study in detail how the priests did their job. So what began as protected knowledge has become totally open to anyone who picks up a Bible today.

So here’s the question: what are the implications when protected knowledge — whether it’s how a particular product works or the specifics of what the priests were doing — becomes open to all? And how do we determine if certain kinds of knowledge should be easily accessible or hard to come by?

As someone who loves both religion and science, I often struggle with how they interact.Are they in opposition to each ...

“This,” Witherly said, “is one of the most marvelously constructed foods on the planet, in terms of pure pleasure.” He ... 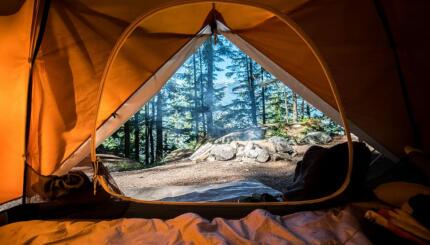 How Big Is the Tent?

The tent is a place of safety and care.