The Jewish New Year at Home

The solar system doesn’t want me to party. It doesn’t want you to party either. If it did, it would somehow avoid putting New Year’s Eve on a Friday night.

It’s been worse. I’m sure many of you Shomer Shabbat people remember that the new millennium was brought in on Shabbat. This is also known as the only time the TV was ever allowed on in my house on Shabbat ever (we turned it on before and didn’t change the channel)–and that was mostly because we wanted to be fully prepared in case the world was about to end.

Then again, that wasn’t my worse Friday night New Year’s Eve. Back when I was in high school, I was stuck in Toronto at my uncle’s house for Shabbat New Year’s Eve. There, I had no friends (still don’t), and went to bed at 11. That was a New Year’s to forget.

But this year, I’m being proactive. I realized a while back that New Year’s was falling on Shabbat. I needed to figure out a plan for me to both have a good time and not break Shabbat. That’s why at week’s end, I’ll be heading up north to my friend’s cottage deep in the frozen tundra of Canada. That way I can party like it’s 2011 (I’m a cool bro in his 20s, after all), and not be condemned to eternal damnation. I mean, who wants to spend $50 at a bar (and that’s a bargain!) when I can hang out in the wildnerness?

It should be a really fun time. My only regret is that I won’t be able to see Snooki drop from a ball in Times Square. In my reality TV obsessed head, that’s like missing Neil Armstrong walk on the moon. 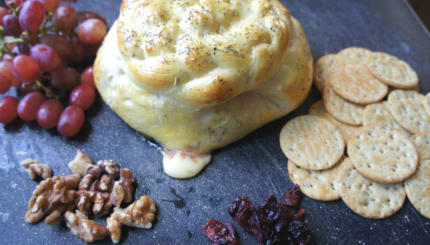 It should come as no surprise that challah wrapped around some brie is delicious, decadent and a great party appetizer.