A mere 0.5% of Israel’s energy comes from renewables. Why? (Ha’aretz)

It is argued that Israel faces a looming electricity shortage crisis, because of failure to build the necessary production facilities. Despite a 2001 goal of 20% production from private hands by 2009, by 2009, it was only 3%. (Ha’aretz)

Preventing the further collapse of seaside cliffs in Israel requires remedial action over large sections of the coast in Netanya, Herzliya and Ashkelon —and a lot of money. (Ha’aretz)

An environmental group urged the Israeli government to close down a baptism site at the lower Jordan River visited by 100,000 tourists annually, until water quality standards for tourists and pilgrims bathing at the holy site can be met. (Ha’aretz)

The past five years “has been the worst uninterrupted period of aridity for 80 years.” But steps to cope, such as abolishing the water subsidy for farmers, are stalled. (Ha’aretz)

Through centuries of exile, Jewish hopes and prayers were focused on the Promised Land. 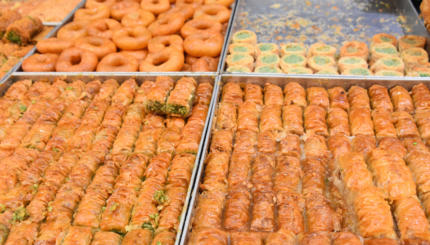 A Guide to Israeli Food Markets

The shuk in an Israeli city can offer a glimpse into the lives of those who visit it.