On Monday, Dani Shapiro wrote about moving from Jewish NY to churchy Connecticut.

In many ways, our move from the city to the country mirrored an earlier shift in my life – one in which I went from the yeshiva to prep school when I was in the seventh grade. My Orthodox father and non-religious mother had fought bitterly over my religious education.

If my father had had his way, I would have gone to yeshiva through high school. But my mother won out, and so I was shifted quite radically from a world which was entirely Jewish to a world which was decidedly not. (From yarmulkes to field hockey sticks in one fell swoop.)

That time was formative, and to this day, nothing makes me more aware of being Jewish than realizing that I’m the only Jew in the room. This is how it felt at prep school—and, once again, this is how it felt in Connecticut. If raising my son to have a sense of his Jewish heritage was important to me (and it was) then I needed to provide him with a community. But how to find a community in the hills of Litchfield County? How, when he was the only Jewish child in his class? What had we done?

It was time to find the Jews.

I started, not with a synagogue, but with a coalition made up mostly of New Yorkers with weekend homes in the area. This loosely-formed group rented

the country club’s hall for the high holidays, and gathered for occasional Shabbats in their homes. They had a spiritual leader—a wonderful young woman who flew up once a month from Florida. But the median age of the coalition was probably around 65. I should have known when we were invited to a screening at Bea and Sol Schwartz’s house of Mel Brooks’ “Blazing Saddles”. Not that there was anything wrong with that — but it wasn’t for our young family.

We then moved on to a Reform synagogue about a half hour from our home. I enrolled Jacob in Hebrew School there, and we attended services — but, after a childhood steeped in Orthodox tradition, it was hard to find a comfort level in a service conducted entirely in English, with occasional outbursts of Lai, lai lai. Time marched on.

I wondered if we would ever find a home as Jews in Connecticut. I considered the idea of rounding up the handful of Jewish children and hiring a tutor to come up from the city — but that seemed both expensive and somehow lonely for them. We needed community. I had always taken the Jewish community around me for granted—but now, now that it was proving hard to find, I wanted it more than ever.

Dani Shapiro’s new memoir Devotion is now available. She’ll be reading at Franklin Park in Brooklyn next Monday night. Come back all week to read her posts for the Jewish Book Council and MyJewishLearning’s Author Blog series. 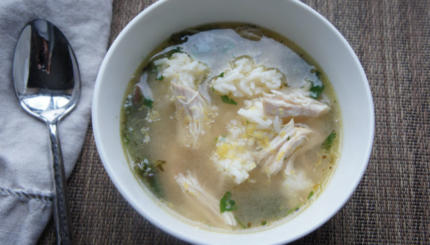 Easy enough for a weeknight dinner, but delicious enough for Shabbat.