Today is the Fast of Esther, the fast that comes the day before Purim, since Purim is happening two days from now.

In the story of Purim, before Queen Esther goes to talk to her husband, she fasts for three days. Which might sound weird, but who am I to judge other people’s relationships? Then again, I’ve

never had to ask my spouse for a favor as big as stopping the genocide of an entire people…so I really don’t have much perspective on the situation. Anyway, in honor of her fast, we fast today.

There are some minor fasts that get passed by or dismissed when other circumstances intervene — anyone who’s supposed to fast for the Fast of the Firstborn but attends a joyous occasion is exempt from fasting. There are also a bunch of laws about when you’re not allowed to fast, too — which might be a surprise to people who think that Judaism throws so many of these no eating/no listening to music/no using electricity days at us. Fasting on Shabbat and holidays, for instance, is forbidden. You’re also not supposed to fast coming into Shabbat — so Fridays are out as well.

Which is how we end up preempting the Fast of Esther for two days.

And how I ended up having a huge bag of jalapeno potato chips sitting on my desk that I was going to finish for breakfast today, thinking, “Gee, it’s great that Purim isn’t for another couple of days”…and getting, so to speak, foiled again. 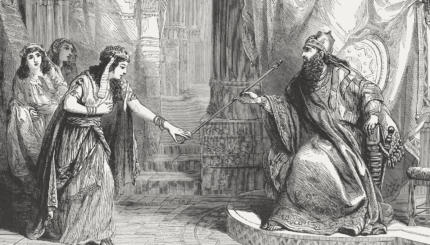 Purim is exactly a month from today. This year in the Jewish calendar is a leap year, which means we ...

One of my favorite parts of Yom Kippur (there are oh so many more) is watching kids in synagogue trying ...