Elie Wiesel, Kickin’ It With the Kids

I haven’t looked forward to a book’s release so much since the final installment of Harry Potter. Here is a new biography of Rashi [1040-1105], part of Nextbook’s Jewish Encounter series, written by one of Judaism’s most revered living authors, Nobel laureate Elie Wiesel. Who better to write about Rashi, the French Talmud scholar, than Wiesel, who attended yeshiva as a youth, found asylum in France after surviving Auschwitz, and went on to study at the Sorbonne?

Wiesel’s Rashi, originally written in French, is a love story between the author and Rashi, who lived and died in Troyes, capital of the province of Champagne. Rashi, an acronym for Rabbi Shlomo ben Isaac, wrote commentaries on the entire Hebrew Bible and nearly the entire Talmud. The greatest of Jewish scholars, more Jews study his words every day than all the other scholars put together.

But Rashi isn’t just words on a page; he was a writer whose personality and opinions permeate his works, a father with three learned daughters in a time when women were forbidden to study the holy texts, and a teacher who attracted a cadre of disciples who wrote devotedly of the teachings they’d “received from his mouth.”

In this slim volume, Wiesel writes a ‘stream-of-consciousness’ remembrance beginning with what he learned from Rashi as a child, then expanded with legends, musings about Rashi’s commentary on Genesis, and finally, comparisons between the First Crusade, which took place towards the end of Rashi’s life, and the Holocaust, which stole Wiesel’s youth and became the force behind his own prodigious writings. Throughout the book, Wiesel asks questions about the medieval scholar who so influenced his childhood. Yet not all his questions get answered. Like Rashi, Wiesel admits that there are things he doesn’t know. 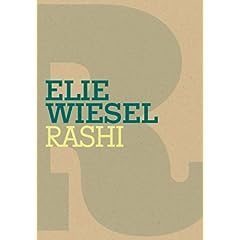 There are only four chapters, less than 80 pages of text. The first chapter, titled “Impressions,” recounts Rashi’s life and places him in a community, country, and historical setting. Legends abound, and Wiesel is careful to label them as such. Considering his own history, Wiesel can be forgiven for focusing so heavily on the adversities that Jews of Rashi’s time suffered, yet he admits that “in the eleventh century â€¦ Jews in Europe and in the Holy Land lived in relative safety.”

During Rashi’s lifetime there were no ghettos, no Inquisition, no blood libels, and no restrictions on Jews’ occupations â€“ these come much later. In fact, Rashi lived at the beginning of what is known as the twelfth-century Renaissance.

Chapter Two, “Biblical Commentaries,” opens with the first line of Genesis and Rashi’s reply as to why the Bible begins with creation and not with the first commandment. Wiesel then continues with selected commentaries on the Garden of Eden, Noah, Abraham and the other Patriarchs, through the death of Jacob in Egypt. I admit I was pleased to see that Wiesel included some of Rashi’s rather “feminist” opinions, such as Adam bearing blame for eating the forbidden fruit — because, by blaming Eve, “Adam showed his lack of gratitude to God for giving him the woman.”

Rashi was not shy about discussing sexual matters in Genesis, and Wiesel is not shy in sharing these. For example: what aroused the serpent’s interest in Eve? “He saw man and woman united sexually, and this excited him,” he writes.

Chapter Three races through Rashi’s commentary on the rest of the Bible — oh, if Wiesel had only included more of Rashi’s Talmud commentaries! — and concludes with some responsa, or legal queries sent to Rashi for judgment.

The fourth chapter, “Sadness and Memory,” returns to the massacres of the First Crusade, some in rather gruesome detail. Only at the final page do we hear about Rashi’s death, as it is mentioned in two different Talmud commentaries, one by his son-in-law and the other by his grandson.

Obviously such a small volume cannot possibly discuss every detail of Rashi’s life and work; even ten such books could not. What is impressive is how beautifully Wiesel gives us a glimpse at what lies behind Rashi’s greatness, a taste of Rashi’s erudition and vast corpus of work.

Some say that Rashi allows us to swim in the sea of Talmud, but Wiesel eloquently writes: “Without him, I would have gone astray more than once in the gigantic labyrinth that is the Babylonian Talmud.” However one describes it, Rashi’s commentary is what keeps us from drowning or getting lost in this otherwise opaque text. And since Judaism as we know it is based on the Talmud — how we celebrate our holidays, observe our lifecycle events, prepare our food, run our businesses, how we relate to our Creator — if Rashi hasn’t given us the ability to understand Talmud, Judaism today would either not exist or be a very different religion.

Maggie Anton is the author of the Rashi’s Daughters trilogy. The final book, Rachel: A Novel of Love and the Talmud in Medieval France, was just released.

From his day until the present, Rashi has been the most beloved of all medieval teachers.

Rashi’s Commentaries on the Talmud

The beloved Torah commentator also wrote a much-used commentary on the Talmud.