My husband and I moved to Rockland County, the far suburbs of NYC, nearly two years ago. At first, it was terribly difficult to make friends or find things to do at night.

Most people move to our neck of the woods (literally, pictured is the road behind our neighborhood) to raise a family. The few restaurants in our town close around 8 pm.

So when my husband went to work meetings nearly every night, I found myself quite bored and rather lonely.

A member of the synagogue, who lives down the street, knew I was spending a lot of time at home and asked me if I wanted to come over one night. A group of her friends were getting together for an activity. “Try it, you’ll like it,” she said. “You can just watch if you want.”

Those words could be bad news on the streets of the Big Apple, but in the quiet suburbs of New City, NY, they were pretty much harmless.Â  Or so I thought. The “drug” she was pushing was mah jongg, and soon after my addiction began.

All I knew about mah jongg before I began playing was that is was some kind of game that old Jewish women played. It turns out mah jongg, a tile betting game that I like to describe as “rummy on crack,” is a highly addictive, very social activity that generations of Jewish women saved from extinction.

Don’t believe me? Read my article about the history of the game (my first article for MyJewishLearning!) or check out nearly any Judaic catalog. Need a mah jongg menorah for Hanukkah? Or mah jongg mezuzah? We Jewish women love our mah jongg kitsch almost as much as the game itself.

Every Tuesday, my mah jongg group gets together to catch up on the week’s events, watch a little American Idol, and play rounds and rounds of the game. I look forward to mah jongg nights all week long and rearrange other events to make sure I don’t miss an evening.

While I do find playing to be great competitive outlet, the truth is that at the end of the night, I don’t care if I’ve won or lost. No matter how quarters or dimes make it back to my house, I’ve gained five wonderful friendships.

Oh Jay Firestone. Replace “Twenty-three” with “Twenty-six” and “male” with “female” and you actually have me: The Next Intergenerational Mah ... 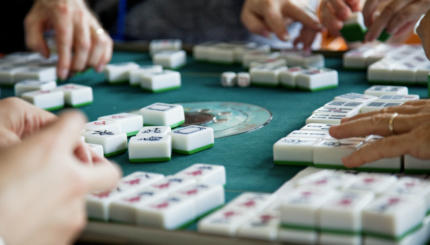 The History of Mah Jongg Snacks

Nearly synonymous with the playing were the ring jells, Bridge mix, Entenmann's coffee cake and other iconic snacks that were served.