The Jew of New York

What’s the key to any ultra-popular Jewish news story? Start out with a question — a popular Jewish activity, asking questions, and follow it with a wry, self-important anthropological explanation of this popular Jewish activity. Then you should probably follow it up with a sharp, vivid picture of a Jew in his traditional Jew garb, preferably surrounded by the modern world, to show the wild and vivid contrast of past and present, the wild fracas of divergent cultures, as if an Amish buggy driver were cast in the lead role of Speed Racer. 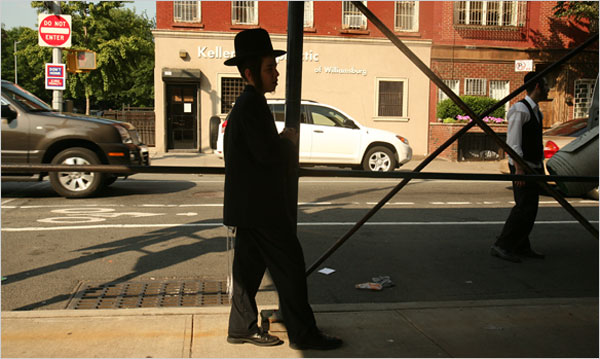 Yes, the New York Times is taking on Hasidim in New York once again. And, just like the time they photographed Crown Heights in black-and-white to pretend it was the 1800s and the time they admitted their fetish for Hasidic hats, the Times reporters love to wax poetic about the wanton Jews lost to time — you know, the ones who live two subway stops away from Union Square who can’t stop playing with the Yiddish iPhone apps.

“The images here,” reporter Alan Feuer notes: “knife-grinders on the street, bearded men in 19th-century frock coats â€” are not only vivid, they are also apparently lost to time.” Lost to time, yes, but not to the Times: they proceed to deliver True Secrets of the Williamsburg World, like that Jews who work in falafel shops will offer salutations to your health before serving your meal (shtetl-fabulous!), or that “some of the residents do not take kindly to intrusion and may greet strangers with a brusque look” (three guesses why).

Feuer continues to a synagogue, where “women are not permitted in, and men from outside the community may be greeted with gruff questions: ‘Excuse me, is there something wrong?'” Dude — I don’t know how to explain this to you, but if you go into a synagogue and you aren’t there to (a) pray, (b) schmooze, or (c) eat schmaltz herring, and you sit there with a reporter’s notebook, no matter if it’s Satmar or Reform, somebody’s bound to think something’s up.

(Thanks to Tamar for the nudge.)

Like many 20-somethings, I have spent countless hours wasting away in front of my computer on Facebook. I mean, who ...

Think about Poland. Think about shtetl life, and Jews in Eastern Europe. Are you capable of picturing that without Hitler ...

Do you ever notice how, for a paper with so much anti-Israel tactics, the New York Times sure reports a ...