Once upon a time, Hasidim were known as a closeted, tight-lipped sect of Jews who practiced mysticism, dressed in an extreme and foreign manner, and offered up little contact with the outside world.

Today, every second household in Hasidic Brooklyn has a webcam, a Twitter feed, and a New York Times story about them. 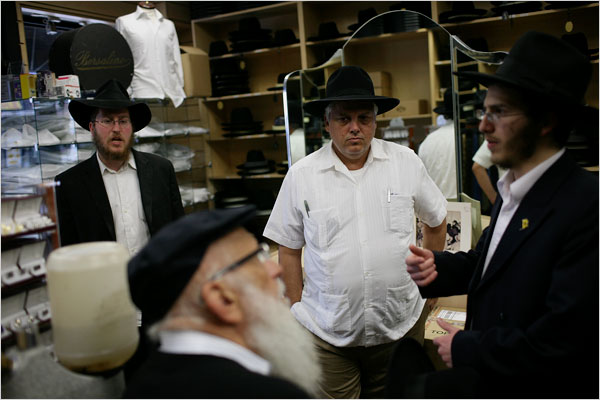 Continuing the Times’ fetishization of Orthodox Judaism, this week’s e-paper includes a photo gallery of 47-year-old Colombian hatmaker Bruno Lacorazza, who is not Jewish himself, but whose trade involves selling hats almost exclusively to Orthodox and Hasidic Jews in New York.

The photos, by Times photographer Ozier Muhammad, are actually beautiful. Between the haphazardness of traveling haphazardly with luxury hats and the Old Worldliness of crumbling shops like Feltly Hats in Williamsburg and the more modern Primo Hatters in Crown Heights.

Of course, the only interior photographs seem to be from the Crown Heights store, where Lubavitchers were probably more than amiable than Satmars to being photographed (here’s one of one of our favorite family friends) and possibly even saw it as an opportunity for kiruv. You can imagine the conversation: “Can we take pictures of people trying on hats?” “Uh, I don’t know…” “But secular Jewish readers of the New York Times will read it and instantly be persuaded to become religious and don big black hats of their own!”

If you’ve never seen a foot-long beard light up in a smile, it did just now.

Remember way back when I wrote about how the New York Times constantly glamorized/fetishized/stared at the world of Hasidic Brooklyn? ...

On the way out of his goodbye party last night, my doppelganger-in-name Shimon Roth grabbed me and said, “Are you ...

In last Sunday’s New York Times, Paula Roth (no relation) covers the opening of a new bar in an area ...