The Guru of Global Warming

One interesting note about the publicity surrounding The Good Book, Slate editor David Plotz’s chronicle of reading the Bible: it’s not very obvious that it only covers half of the Bible — or, at least, what most of America defines as the Bible: which is to say, he’s writing about the Jewish Bible, or, as our Christian neighbors like to call it, the Old Testament. 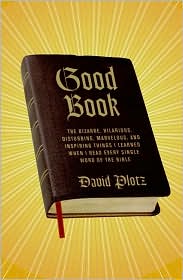 Like I said, you wouldn’t be able to tell from the title. And you especially woudln’t be able to tell from the cover, which has the words Good Book written out in an old Church Gothic typeface atop a floppy plastic-bound book, the kind made famous by the wandering Gideons and their hotel-room souvenirs, with rays emanating from it like a medieval fresco of Jesus with his halo on fire.

And then we get to the first sentence of the book:

I’ve always been a proud Jews, but never a very observant one.

From there, Plotz discusses his childhood spent not paying attention in Hebrew School, his efforts to evade going to synagogue, and his wandering attention span during his cousin’s bat mitzvah. One might wonder why so many people who know so little about the Bible are so eager to talk about it so often, and at such length. Even more suspect is why we, as a public, love to read about this tripe. Would you buy a travel guide to India from someone who only flew in and stopped at the Taj Mahal for a quick photo?

There’s a new subgenre of memoir that seems to be centered around willful ignorance. Perhaps so many of the most high-profiles entries have been Jewish in content because Jews buy so many books; perhaps it’s because Jews are so proud of their ability to talk about things they don’t know. (Full confession: my memoir, Yom Kippur a Go-Go, is also about not knowing a lot about Judaism — although it’s about becoming Orthodox, which is kind of about making yourself un-ignorant.) A.J. Jacobs was clearly the pioneer in the field; in The Year of Living Biblically, he professes his own ignorance, seemingly to an inordinate degree, but, eventually, mostly in the context of seeking something beyond knowledge, searching for a way to get past his social convictions and skepticism, and enter into a state of simple belief. But Plotz is, if anything, learning. His goal here is a noble one — which, simply, is to make himself (and, through our willingness to follow his narrative, us) less dumb about what actually happens in the Bible. Starting in Genesis, and working his way, chapter by chapter, through the Torah and the Prophets and Writings, he gives us brief, understandable, and palatable commentary on what exactly goes on.

Each chapter gets a page, more or less. Some entries, like chapters of Isaiah, only last for a line or two, but even Creation only takes a page. There isn’t much in the way of analysis, and what there is is fleeting. It’s sort of refreshing and sort of maddening, like watching a game of Jeopardy with a few good questions that you wish you could learn more about.

So far, Good Book feels more than a little like reading a Cliff’s Notes version, and a little like peeking over at the notes of someone whose mind has a tendency to wander. So far, I’m most of the way through Genesis, and I have to say, he plows through the foliage of archaic textuality pretty well. It’s conversational, approachable, a little highbrow and a little dirty — kind of like Shakespeare. He does dwell on the sex — especially the story of Dinah being raped, which is the story that kicks off Plotz’s whole Torah obsession — but one of the questions on the back is, why are so many women in the Bible prostitutes? Questions like this are what are going to drive the book forward, if anything will. Much more so than the anecdotes about his daughter and wife, which are too quick and devoid of actual character development (probably, in all fairness, so as not to embarrass them, which is totally noble and just — only, if you’re going to do that, then keep them out of your book in the first place!) to feel substantial. On the other hand, the idea that, if the Bible really is the cornerstone of our culture, we should at least make the effort to try and understand it…well, that’s worth pitching in the time for. Even by reading a book by a self-professed whatever-the-opposite-of-an-expert-is.

Since 2006, Slate editor Daivd Plotz has been “blogging the Bible.” Unsettled by reading the story of the rape of ...

David Plotz: Is Monotheism for Jerks?

David Plotz is guest-blogging for MyJewishLearning and the Jewish Book Council.There are the writers who succeed by arguing evolution exists ...

David Plotz: Why Is Judaism Such a Failure?

In his last blog, David Plotz, author of Good Book: The Bizarre, Hilarious, Disturbing, Marvelous, and Inspiring Things I Learned ...