Francesca Lia Block changed the face of young adult publishing with her first novel, Weetzie Bat — a book that was mature (both in the “sophisticated” sense and the sense of mature themes) beyond

anything else that was being published in the genre of children’s literature at the time, but never lost sight of its primary audience and never stopped being, at its heart, a book about a teenage girl. She’s influenced by imaginary realism writers like Gabriel Garcia Marquez and Jeanette Winterson, as well as early film (think Georges MÃ©liÃ¨s) and the golden age of Hollywood. Weetzie is the tale of a girl whose father (a Jewish immigrant) became an effects man in Hollywood, and whose life starts off surreal and blossoms into a fountain of weirdness.

Her latest novel, Quakeland, is a departure both stylistically and thematically. While it retains Block’s surreality and manic, fragile beauty, Quakeland also plays with themes of broken lives, questioning, repentance — in other words, it’s perfect Rosh Hashana reading. It draws from recent American tragedies (the main characters’ names are Katrina and Grace) as well as people with premonitory dreams of 9/11, and domestic violence.

We spoke to Ms. Block about the new book, the New Year, and the nature of catastrophes…and how to derive hope from them.

We’re getting really close to Rosh Hashana, the Jewish New Year, where we’re supposed to be thinking about repentance, and apologizing to the people we done wrong — which has always seemed to trigger existential crises in the people around me. The past few years, it’s also seemed uncomfortably close to major catastrophes — like, as you talk about in Quakeland, 9/11 and Hurricane Katrina. What do you think of the relationship between society and self? Do you think it’s changing?

I think with all the upheaval in the world, and fears about the survival of the planet, we as individuals are internalizing much of this and learning how to go on even with this burden.

My six-year-old son often asks me when and if the planet is going to explode and if the sun can burn us up. I think this generation is experiencing the most potent anxiety, perhaps ever, but perhaps also the most consciousness.

Do you feel like people can ever “own” a tragedy? Was it scary to write a book that so many people have such strong emotional contact with? 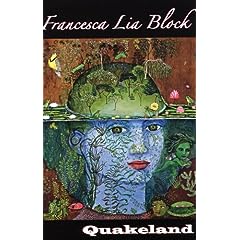 I think that all we can do is respond to our world from the most truthful individual place. My stories are not social commentary but personal expression. They are my way to try to understand, process and perhaps internally transform pain through love and art. They certainly don’t try to take on the way so many other people experience something, but perhaps there’s sometimes some overlap.

Early in your career, it felt like your heroines (Weetzie in particular, but also Mab and Barbie, and Violet) are really type-A personalities — in-control, taking the world by the horns and giving it a good shake. In contrast, Ruby and Grace both seem shaken and uncertain, caught offguard by what the world’s dealt them. If somebody forced you to attribute it to something, do you think it’s growing older? The world changing? You changing as a person?

Ruby and Grace have both been faced with strong personal challenges. Ruby was abused by her father and Grace has cancer. Mab and Violet haven’t had those kind of challenges. Even Weetzie, though she lost her dad, didn’t face the same kind of pain (although Barbie does to an extent) So I’m just dealing with how characters respond to situations. It’s funny because I actually perceive Ruby as a much more active heroine than Weetzie–she goes after what she wants and gets it. Grace seems to me to be one of my most brave characters because what she has to face is so immense.

Ultimately I suppose the change you see could reflects the change in the world and in me. I wrote Weetzie almost twenty years ago and since then I’ve gone through a lot in my life. I still believe in the healing power of love and art but I’ve also seen and felt a tremendous amount of pain.

You have a huge online presence, both through fans and on your own. Do you feel at all pressured to tell happy stories, or to rewrite the same stories again?

I can’t do what doesn’t feel organic to me. I have retold the same story a few times because I’ve needed to explore it from different angles but I can’t write a book that doesn’t come from a genuine place. My fans seem to understand this.

I have been moving toward more violent imagery and to be honest I am a bit inhibited about this, as opposed to how free I feel about writing erotica. I am examining my interest in the dark side and my reluctance to fully explore it in my work.

It has something to do with my childhood where violence was taboo but sex was not.

What’s the ideal reading environment for Quakeland? How do you want people to come away from it feeling?

I usually hope that my readers come away feeling hopeful but by adding the last story to Quakeland I knew I was complicating the chance of providing that experience. I wanted to write the truth because as painful as it can be, I believe that by facing it, processing it, expressing it, sharing it, we can go on and move beyond it.

I also wanted to write something that is beautiful and moving — and therefore cathartic — in spite of the dark content.